The European Commission’s European Universities Strategy, which seeks to create new supranational educational institutions, will be the main subject dealt with at the conference. The event is part of the programme of the UNESCO World Conference on Higher Education, which takes place the same week in Barcelona. 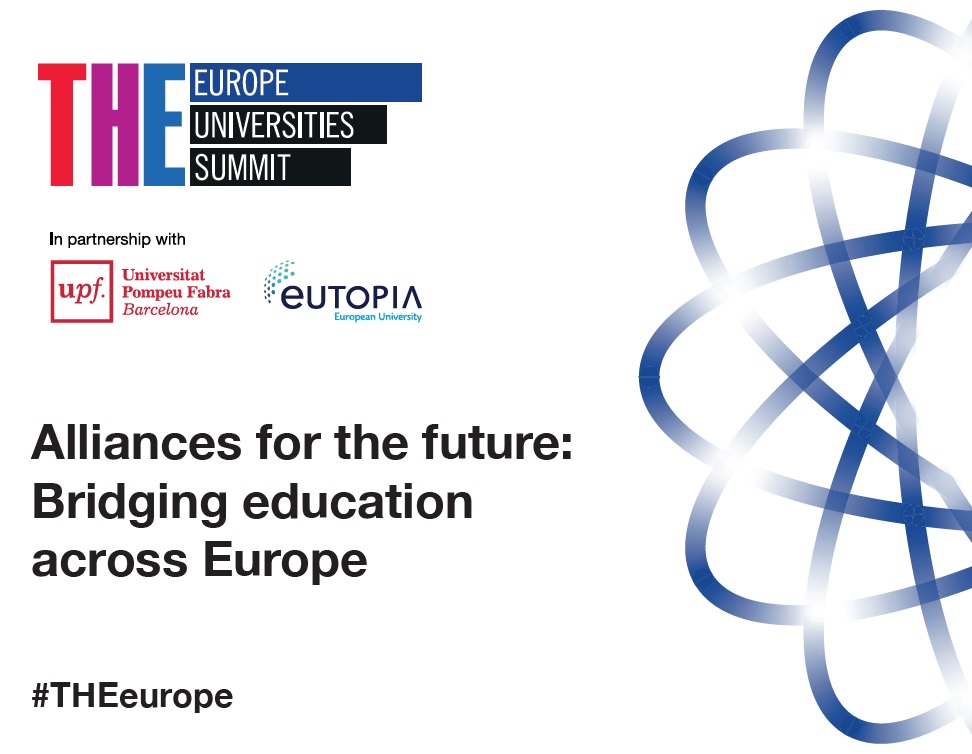 Titled “Alliances for the future: bridging education across Europe”, the Europe Universities Summit is organized by Times Higher Education (THE) UPF and EUTOPIA European University, of which Pompeu Fabra University is a member along with a further nine universities from across the continent. The summit will gather the main players in the construction of the new supranational networks of universities being promoted by the European Commission, on the Ciutadella campus.

The summit, which will take place on 16 and 17 May, is an event that will be linked to the UNESCO World Higher Education Conference 2022, which is held every ten years, and for the first time in Barcelona. During the two days of presentations, key questions will be dealt with on the construction of the European higher education system. Among others, the subject of the benefits of alliances of European universities will be broached to build a resilient, progressive higher education system and how collaboration and knowledge-sharing through alliances is impacting European and global cooperation.

In the words of Oriol Amat, UPF rector, “initiatives like this summit are essential to understand the different personalities and needs of European universities, and to raise global awareness of the important role we have when promoting development and wellbeing, not just on our continent but throughout the world”. And he adds that “to do so with our European partners of the EUTOPIA alliance is the perfect occasion to establish, promote and strengthen relations with some of the best international universities”.

“Initiatives like this summit are essential to understand the different personalities and needs of European universities, and to raise global awareness of the important role we have when promoting development and wellbeing, not just on our continent but throughout the world”

The meeting, organized with the support of the UPF Barcelona School of Management, will welcome some 200 participants and over 30 distinguished speakers from the world of higher education such as Michael Murphy, president of the European University Association; Funmi Olonisakin, vice-president and vice-principal (International) at King’s College, London; Francesc Pedró, director of the UNESCO International Institute for Higher Education in Latin America and the Caribbean, or Rocky Tuan, President of the China University of Hong Kong.

The opening ceremony will take place on Monday 16 May at 1 am with the participation of Joan Subirats, Minister for Universities; Phil Baty, Head of Knowledge at Times Higher Education, and Oriol Amat, Rector of the UPF.

The summit of the European Council held in Göteborg in December 2017 witnessed how the higher education landscape in Europe was rapidly changing. One of the initiatives pointed out at the time was the creation of a score of European universities by 2024 that would allow students to get a degree combining training in different countries of the European Union. The ultimate goal pursued was to join forces and improve the international competitiveness of Europe’s universities.

To this end, the European Commission launched the European Universities Initiative, which defines them as “transnational alliances that will become the universities of the future, promoting European values and identity, and revolutionizing the quality and competitiveness of European higher education”. There are currently 41 consortia, including EUTOPIA, and each consortium is made up of a varying number of universities: between five and eleven.