"One of the frequent stigmas of the Raval is that you will end up working in the family shop, but I myself am proof that it doesn't have to be like that" - Interviews

"One of the frequent stigmas of the Raval is that you will end up working in the family shop, but I myself am proof that it doesn't have to be like that"

"One of the frequent stigmas of the Raval is that you will end up working in the family shop, but I myself am proof that it doesn't have to be like that"

Gayatri López, UPF alumni and participant in the first promotion of the project Prometheus. 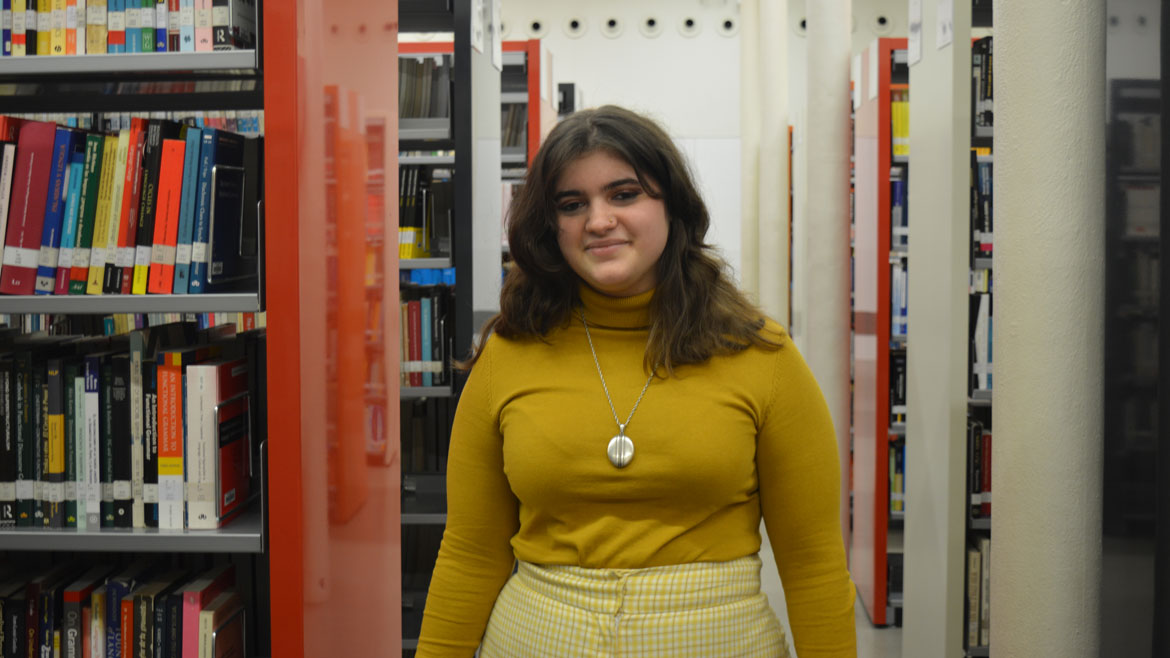 Gayatri López and a further fourteen students from the Raval district celebrated their graduation ceremony as the first cohort of the Prometeus Project, on 8 November 2021, at Barcelona City Council’s Saló de Cent hall.

In 2016, Associació Educativa Integral del Raval (AEIRaval) and the medium El Periódico del Raval promoted the Prometeus Project with the aim of increasing the number of young people with a university degree or vocational training in the neighbourhood. According to Open Data BCN, the Council’s open data service, it can be seen how the neighbourhoods with the highest per capita disposable family income (DFI) index, such as Sant Gervasi - Gavany, have a higher number of university graduates compared to neighbourhoods such as the Raval, where the DFI is lower.

Reports also show that as the DFI decreases, the rate of higher education is reduced to less than 10% in neighbourhoods such as Torre Baró. This phenomenon becomes like a dog chasing its tail and perpetuates inequality indices. A clear indicator of breaking with this spiral can be seen in the example of Gayatri López, a participant in Prometeus and a graduate in Translation and Interpreting at UPF.

The success of this first group of students is consistent with a project that currently supports more than 70 students during their time at university.

- When did you first hear about the Prometeus Project? Had you planned on going to university?

Well, it was while I was in high school. My teacher told us that there was a meeting where they would talk about a very interesting project for those of us who wanted to go to university and that it would help us a lot. Also, my parents always encouraged me to learn, and since I’ve always enjoyed reading, I wanted to follow this path.

- What did the support from the project consist of during your time at university?

Besides bureaucratic issues, they helped me to get access to all kinds of scholarships and they lent equipment, such as laptops, if a student needs one. In addition, Prometeus provides important emotional support. If, for example, a student thinks it’s impossible to finish university, there are many other students in the project who offer their help with the subjects they find easy. Then, one of the project directors, Javier Alegría, is very concerned with the mental and emotional well-being of the Prometeus students. In my case, when I had problems with depression in the second year, it was he who recommended a psychologist and helped me in every way he could, together with his wife.

I would say that Prometeus not only encourages you to keep going, but they show you the people you can talk to in case you need it.

- Was this support affected by the pandemic? In what way?

Yes, a little. We usually hold a monthly meeting to see how everyone is doing in their studies. During the pandemic we had to do it on Zoom and so it’s much harder to hear, in addition to connection issues or if you just don’t feel like making the call. As a result, communication became a little more difficult. I, for example, was without Wi-Fi for three weeks and forgot that I could talk to the Prometeus members to help me with this. I think that during the pandemic, not seeing them made us “forget” that we could ask for help.

One of the frequent stigmas of the Raval is that you will end up working in the family shop, but I myself am proof that it doesn’t have to be like that

- Do you think it is important to have people with university education as a reference in neighbourhoods like the Raval?

Last week we visited the high school where I used to study and I saw how important it is to go and tell students that it is possible to get in to and finish uni. Many of them said it was impossible, that it was too expensive and that they didn’t feel capable of it, but they hadn’t even started. One of the frequent stigmas of the Raval is that you will end up working in the family shop, but I myself am proof that it doesn’t have to be like that. That’s why it’s important to talk to them and say: “I studied here, at your high school, it was the same for me as it is for you, good in some subjects and bad in others; I’m a normal person and I’ve finished university. You can do it too”.

- And why do you think that in districts like the Raval the idea that “it’s too expensive” or “I can’t see myself being capable” are so common?

With a lack of money it is very typical to want to get a job as soon as possible to bring money home, and this is often the case in the neighbourhood. People “forget” about this shortcut and put it aside.

- Why did you choose the bachelor’s degree in Translation and Interpreting at UPF?

It was hard for me to choose! I was split between Journalism, Psychology and Translation and Interpreting, but the latter did not occur to me until the end of high school. I don’t think it was until the selectivitat entrance exams that a teacher told me what the degree consisted of and that I would be fine if I liked languages. In addition, I also love to think that translating is not just about grammar, it’s literature, it’s understanding and it’s about bringing stories to people who don’t speak the original language.

Many of them said it was impossible, that it was too expensive and that they didn’t feel capable of it, but they hadn’t even started

- Your younger sister, Sarasvati López, is also studying at UPF

Yes, we are quite similar. She loves languages, books and what I was studying. For a while she looked at a lot of things about book publishing, but she didn’t know exactly how to become a publisher. In the end she thought that if she went into the branch of translation, she could get into publishing at some point, and so we ended up studying the same thing. But while she’s more interested in translating on paper, I’m much more interested in interpreting. In fact, in the first year we listened to a one-hour speech about the work of interpreters in the Catalan Parliament and it inspired me a lot.

- How important is the support network and accompaniment of the Prometeus Project?

Extremely! In fact, it’s one of the most important things about Prometeus. Maybe, the first year it wasn’t so important because they were still looking to see how the project was going. But in the second and third I signed a document verifying that I was receiving help, but that I also had to give some. In the end, the project is about receiving support, but also about giving it to future generations.

- What do you give back to the Prometeus project?

Experience. Through your knowledge you can help others in Prometeus and high school students. If someone has problems with a subject, another offers to help them, if you are disheartened with the studies or you think you are not capacitated, at the group we also encourage you to keep going. But there were also some who dropped out because they could not keep up.

- What do you think you can contribute from your experience?

My ‘mistakes’ (laughs). Rather than mistakes, I’m talking about things that have happened to me that aren’t entirely good. I can encourage Prometeus students and tell them everything I’ve been through. Another thing I told them was that the entrance exams seemed easy to me, and when I did, everyone was amazed. I was the first person to talk to them about selectivitat being an easy test. Obviously, you have to study, but it is not impossible, and you don’t have to die of anxiety either to get a good grade. Students need to be told they are capable, receive encouragement and support.

In the end, the project is about receiving support, but also about giving it to future generations.

- What does it mean for you to be part of the first cohort of graduates of this project?

I am the proof that it can be done even if you have problems and difficulties with the degree, I can come back and help other people. What’s more, I like people realizing and seeing how important these kinds of projects are, and that’s why we held the graduation at the City Hall, with the mayor and everything. It is very important that 15 people from the Prometeus project managed to graduate; it proves that the initiative is a great success.

- If this project hadn’t existed, what path do you think you would have taken?

I would have gone to uni, but I’m not sure if I would have finished. First, because of financial problems. The scholarships helped a lot, especially in the case of the salary grant, which I would not have obtained without Prometeus. But then I had a lot of problems in the second year. The following year I had four failed subjects and was unable to get the salary grant. Without the Project it would have been pretty difficult to do it on my own.

- What is the next step now that you have graduated?

Now I want to work doing whatever. After the pandemic and with four people at home, I want to become independent! When I have a stable job and see it’s possible I will try to find something more related to the world of interpreting. But actually, right now I’m doing an assignment to translate two books with my sister, so I’m busy right now (laughs). We are also in Ràdio Rambles with some Prometeus companions and we intend to continue.

It is very important that 15 people from the Prometeus project managed to graduate; it proves that the initiative is a great success

- Will you keep in touch with the Prometeus project even though you have already graduated?

Yes, because now we are taking the next step which is the Prometeus Laboral. The project does not want to leave you alone once you have graduated; it wants to help you find a job, draft an attractive resume, create a profile on LinkedIn and, above all, make contacts. In fact, the other day we had a meeting with Salvador Alemany, a very important man born in the Raval who is the founder of SABA car parks and president of the Liceu. He told us about lots of things, especially how to look for work and how to take advantage of the best opportunities.