Jan Eeckhout, ICREA research professor at the UPF Department of Economics and Business and author of the book The Profit Paradox 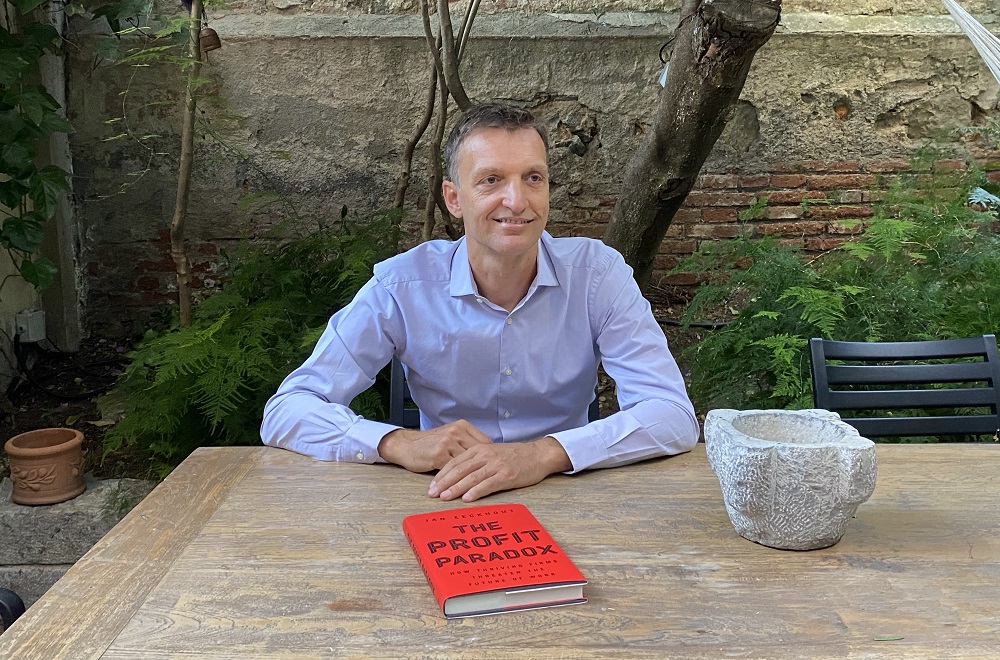 The result of many years of academic research, first at several universities in Britain and the United States, and since 2008 at UPF, Jan Eeckhout (Aalst, Belgium, 1970), ICREA research professor at the Department of Economics and Business, wanted to explain in plain English a series of macroeconomic dynamics harmful to consumers and most companies.

The result is the recent publication of The Profit Paradox (Princeton University Press), a work in which he tells how the growth of the worldwide tidal wave of market power is choking employees across the globe and how a small group of large companies has obtained the majority of revenue derived from technological advances, in addition proposing solutions to purge the economy.

—What led you to write this book?

After many years of research on the subject, I thought it was a good time to reach a wider, less specialized audience. In addition, the timing was perfect because, with several co-authors, we had found results linking economic trends that were previously difficult to explain. My goal was, therefore, to explain the statistics and data from the point of view of “normal people” to show that what is happening to the economy is important for all of us. So, it is a book that tells stories.

When we look at the stock exchange and we see that the Dow Jones index is going up, it means it’s bad news for the economy

—Can you outline what the “paradox of profit” consists of?

When we look at the stock exchange and we see that the Dow Jones index is going up, it means it’s bad news for the economy. In any competitive economy, companies that innovate and discover new technologies are rewarded with profits. That is what constitutes a market economy. That means that successful companies are profitable and, if they’re profitable, that increases their stock market valuation. What’s wrong with that? Absolutely nothing.

The problem is that now there are several massive companies that make huge profits because they don’t face any competition. They charge excessively high prices for what they sell, and this affects innovation. And although these companies are big, there are only a few hundred of them and they’re relatively few compared to the whole economic sphere, where there are millions of companies.

—How have we come to this? How have the mechanisms to ensure competition failed?

We are in a period of rapid technological change. New technologies are improving the quality of our lives. We are living longer, working fewer hours and it’s more profitable to produce all goods and services. And much of this economic progress has been made and is still being made by these dominant companies such as Facebook, Visa and Amazon, for example. They innovate a lot. This is the heroic part of technology.

Companies such Amazon don’t transmit their profit to the customer

But, there is also a downside, which comes from the fact that these companies use the same technology to stifle competition. That means that they can operate in their market without any real competitive pressure. And, as a result, a company like Amazon, which has invested so strongly, has become so profitable that it can deliver anything to our front door cheaper than any of its competitors, from light bulbs to clothes and online movies.

But, since no-one can compete with them, the cost is even lower than the already low price we pay. In other words, they don’t transmit their profit to the customer.

—How are innovation and the creation of startups harmed?

The key word is scale. These large companies need scale to generate such big efficiency gains. Amazon’s network of centres and its logistics are only paid with lower costs if the sales volume is massive. As a result, there is not enough space for two Amazons and, in fact, new technologies create these scale benefits.

New technologies are particularly susceptible to generating scale benefits. Consider, for example, companies like eBay or Facebook. Their platforms create network effects. The network effect means that what buyers and sellers really want is to be in a market where there are many other people. Again, we require a large scale. There’s no room for two such companies.

So, what we see with these new technologies is that initially there was a lot of competition for the market. But, once the winner wins this market, there is no competition, and therefore there are few opportunities for new businesses and startups.

It is not the first time in history we’ve seen this happen. A similar development occurred around the year 1900. Then, there was rapid technological change and again it was a story of goodies and baddies. After, it was the development of the production of electricity or crude oil, rail transport and the telephone. These new technologies completely transformed the economy, just as our new technologies have done. Like now, companies managed to use technology to gain an advantage and stifle the competition.

—What is the explanation for the fact that these technological improvements lead to lower wages and increased inequalities?

Because the price of many products is much higher than their cost, people buy less. If the iPhone 9 were sold at 350 and not 1,200 euros, more people would buy it. Therefore, fewer units are produced and we need fewer services and apps. The macroeconomic effect, if there are more dominant firms in all sectors, is a reduction in the demand for labour, and therefore wages. Not all wages because they, who get profit shares, they do have higher salaries. This leads to an increase in inequality.

The macroeconomic effect, if there are more dominant firms in all sectors, is a reduction in the demand for labour, and therefore wages

—What needs to be change to ensure that the benefits of innovation are returned to the consumer and medium-sized companies?

Just one thing: more competition between companies, and that’s also good for the economy: consumers, wages and all the millions of non-dominant businesses.

—Has this wall or ditch the tech giants have created around them been set up with the acquiescence of political power? Should politics and economics play on different teams?

Yes, absolutely. The referee is at the same time player and coach. Currently, we have a vicious circle: dominant companies that use their profits to influence regulation which at the same time gives them more power in the marketplace. This, in turn, provides them with even more profits that allow even more influence in politics. What we need are clear rules and separation between regulation and business.

—In the book you speak about the interoperability of the mobile phone market in Europe as a good model of competition. How does this mechanism work? Could it be transferred to other markets?

Let’s consider, for example, the telecommunications market. Allow me to compare my mobile phone deal in the United States with AT&T with my deal in Europe. My AT&T deal costs more than double my deal with Movistar in Barcelona. What’s the difference? I use the same device. The companies operate similar technology. They have the same cellular antennas. And the size of the market is also not so different: if I look at the European market, there are about 400 million people, and the United States, about 360 million. So, where do these differences in prices come from?

Well, there is one big difference and that is a standard in the European market that says that anyone who owns a cell tower must allow any competitor to use the same tower in exchange for a fee. Of course, the owner-operator of the tower doesn’t like this regulation; but the impact on the customer is wonderful because prices come down because competitors can enter the market without the need for major initial investments. The absence of such regulation in the US telecommunications market is the reason why AT&T deals are so expensive and the profits of AT&T, Verizon and T-Mobile are so high.  This is the principle of interoperability, and yes, it has the great potential that it can be applied in many other markets. For example, it’s already being implemented in Spain with the competition between train operators with Ouigo.

AI is an ideal tool to create market power

—What kind of body should be created to regulate competition effectively and what features should it have?

First, I think we should break the relationship between legislation and enterprise. Therefore, it should be an independent body. Second, it is a global issue. So we need international coordination. Third, we must devote more resources to intervene in more markets, where each case is a world apart. All this can be regulated only with many more experts. However, as they are only three or four hundred companies globally, there is hope of reaching a satisfactory solution.

—If we don’t do things right, will the market for artificial intelligence further increase this distortion? Are we in time to get it right?

Yes, AI is an ideal tool to create market power and will have an even greater effect than we can see now. But yes, we have to hurry to prepare the regulations and the institutions that can intervene.