Half a millennium after Leonardo, the continuous search for order in dynamic processes is a cornerstone of modern biology, highlight the authors of an essay published in Current Biology of which Gustavo Deco, director of the Center for Brain and Cognition, is the first author. 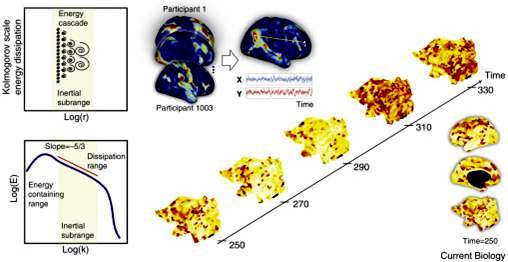 Finding order in chaos is a hallmark of science and art. In the time of Leonardo da Vinci (1452-1519), the schism between science and art had yet to arise. In fact, Leonardo freely used scientific methods for his art and vice versa; for example, when he used his observations of turbulent, whirling water to guide his artistic imagination.

Half a millennium after Leonardo, a cornerstone of modern biology is the continuing search for order in dynamic processes, assert the authors of a recent essay published in Current Biology. A study by Gustavo Deco, director of the Center for Brain and Cognition (CBC) and ICREA research professor with the UPF Department of Information and Communication Technologies (DTIC), together with Martin Kemp (University of Oxford, UK) and Morten L. Kringelbach (University of Oxford, and University of Aarhus, Denmark).

The scientific study of turbulence is one of the great triumphs (and problems) of modern day physics. Werner Heisenberg (1901-1976) discovered the fundamental statistical rules of turbulence in 1946, and the Russian mathematician Andrey Kolmogorov (1903-1987) got ahead of him with his revolutionary phenomenological theory of turbulence.

“In neuroscience, research has focused on understanding the complex brain dynamics of space-time”, Deco points out. “Recently, turbulence has been shown to be a guiding principle underlying the necessary information processing, supporting Leonardo’s search for order in chaos. Here, we argued that Leonardo’s fundamental ideas are constantly relevant to modern day neuroscience”, he adds.

Leonardo’s commitment to the study of the turbulence of water went beyond observable physical phenomena. It spread to his thought processes. Leonardo’s non-linear, intertwined ways of thought and representation assumed “what could be described as a turbulent mode of operation. This approach is one of the general characteristics of creative thinking”, the authors suggest.

“Recently, we were able to use tools developed in turbulence physics to describe how the activity of the entire brain displays turbulence”, Deco highlights. And he adds that this is not surprising since, to survive in a complex world, the brain must mix a large amount of information in space and time. “This is exactly what turbulences are used for. It also provides a general principle of order in complex and apparently chaotic brain dynamics”.

As Leonardo sensed, turbulence is characterized by the rich variability of vortices of various sizes that can now be characterized as synchronized local clusters. Following Leonardo, turbulences in modern science are not only a fertile generator to mix things and find order in chaos, but also could be key to understanding the general principles of the processing and transfer of information in the brain.

“Turbulence in the brain is found in fluctuations in the local synchronization of neural activity more than in kinetic fluctuations of molecules in fluids. Physical systems are different, but the underlying order obeys similar principles, namely, their apparently chaotic fluctuations appear hierarchically arranged, giving rise to turbulences”, the authors explain.