A new EU Horizon 2020 project endowed with 8 million euros is to hold its kickoff meeting online today, 25 January. It is to foster the creation of improved drugs and medical devices through computer simulations. It involves Oscar Camara, a researcher at the BCN MedTech Research Unit.

Today, Monday 25 January, the partners of the consortium of the SimCardioTest project are holding its kickoff meeting online. This EU Horizon 2020 project has a budget 8 million euros over the next four years. It involves Oscar Camara, a researcher at the BCN MedTech Research Unit, attached to the UPF Department of Information and Communication Technologies (DTIC).

The search for new drugs and devices is particularly difficult in the case of heart conditions, which remain the leading cause of death worldwide, with 18 million deaths each year, according to estimates by the World Health Organization. Currently in Europe, 15 million people live with heart failure and it is one of the few cardiovascular diseases whose prevalence continues to increase. In addition to the risk of death, heart failure has a major, lasting impact on the health and wellbeing of patients.

Despite the massive investments in health, the number of new approved drugs has remained stable during the last ten years. The huge increase in R&D&I costs and the complexity of the regulatory pathways greatly hinder the marketing of new drugs and threaten many patient populations that do not receive suitable treatment.

Computer simulation and modelling can create scientific evidence based on controlled research including satisfactory safety and effectiveness requirements and better access. The main goal of SimCardioTest is to demonstrate the feasibility, effectiveness and benefits of in-silico trials in developing devices and drugs targeting the heart.

SimCardioTest will help reduce the size and duration of clinical trials in humans and help significantly reduce animal testing. It will also contribute to reducing development costs and time-to-market of new drugs and new medical devices available to patients. This project will facilitate and foster the industrial and commercial exploitation of the results.

The project is coordinated by the Institut National de Recherche in Informatique et en Automatique (France) and includes an international consortium of 10 partners. SimCardioTest is to develop a standardized, secure platform, accessible via the Internet, on which in-silico trials can be conducted smoothly.

modelling for in-silico simulation of catheterization and pacing devices (catheter navigation, pacing performance and mechanical fatigue). It will use a physical simulator via 3D printing and robotics;

modelling the interaction between the drug and the cell ion channel to analyse the effects of drugs on multiple cell and organ levels in normal and diseased conditions, such as ischaemia, heart failure and atrial fibrillation. 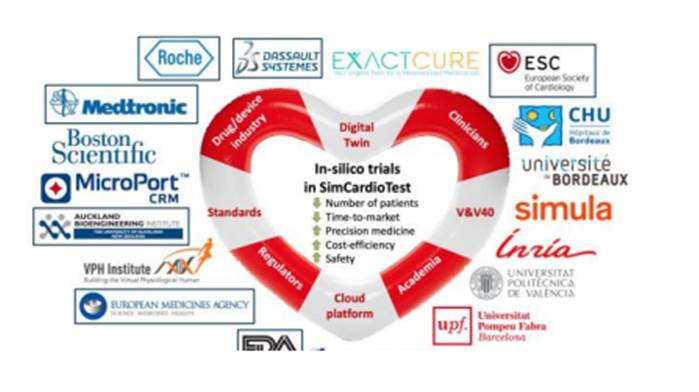 47 researchers are to meet today online

The project brings together ten institutions from six countries involving 47 scientists. They will all meet today online, coordinated by Inria (France). The SimCardioTest consortium partners are scientific institutions and partners of centres in France, Belgium, Italy, Norway, Spain and the USA. The project has an Advisory Board comprising the European Medicines Agency, the US Food and Drug Administration (FDA), the company Roche, University of Lyon, Dassault Systèmes and the Auckland Bioengineering Institute in New Zealand.