This was the central thesis of the four-minute presentation by Artem Komissarov, a PhD student of Biomedicine at UPF, winner of the fifth edition of the scientific dissemination competition organized by the University’s Doctoral School. 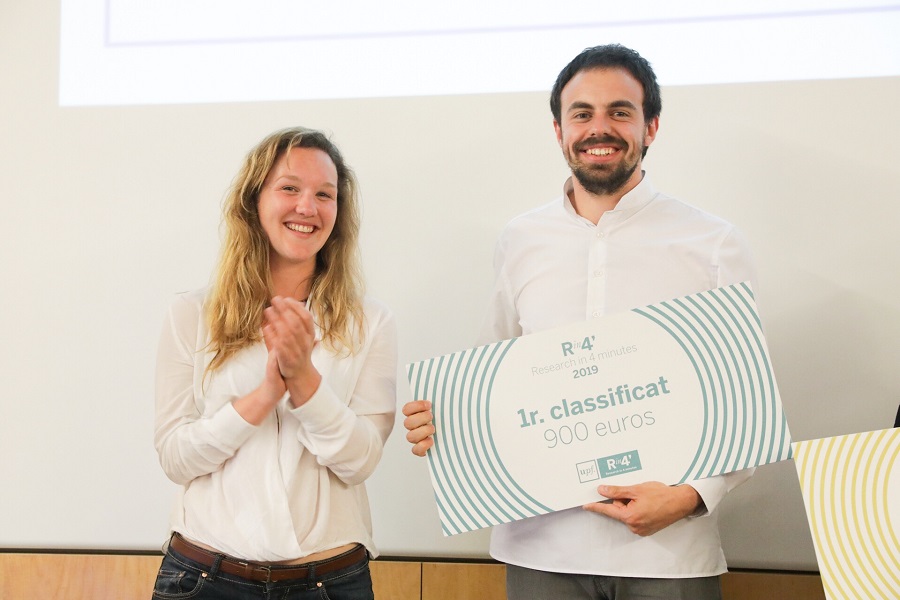 Artem Komissarov, a student on the doctoral programme in Biomedicine at UPF, was the winner of the fifth edition of the Rin4’ (research in four minutes) competition with the presentation entitled “Biochemistry: from DESTROYING to CREATING”. For four minutes, using informative language, he explained how neurons transport molecules over long distances, the basis of his research.

At the end of the championship, which took place on 14 May in the multipurpose room of the Mercè Rodoreda building on the Ciutadella campus, ten UPF PhD students took part (from a total of 24 participants in the qualifiers), pertaining to the doctoral programmes in Biomedicine (6), History (2), Economics, Finance and Business (2).

The final was attended by Núria Sebastián, director of the UPF Doctoral School, which organized the competition, and by Alicia Sánchez, a PhD student of the Multicell Genome Lab at the Institute of Evolutionary Biology (CSIC-UPF), who was tasked with delivering the awards.

Alicia Sánchez won last year’s Rin4’ as well as the 2018 edition of the “Read your thesis in 4 minutes” contest, organized by the Catalan Foundation for Research. The competition involves twelve Catalan universities at the final of which this year UPF will be represented on 4 June by Artem Komissarov.

How do molecules circulate through neurons? 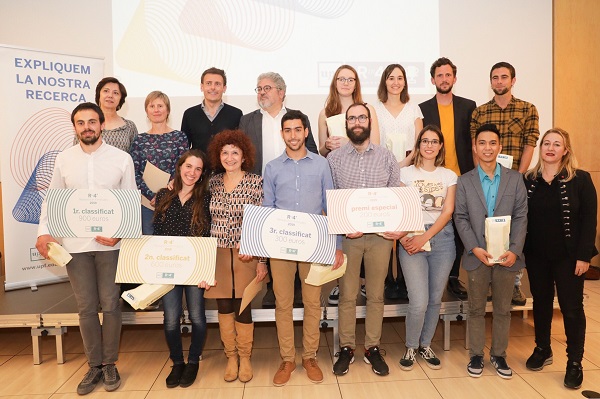 Artem Komissarov, who won the 900 euros for the first prize, after being proclaimed the winner, said “the most important thing is that you can get the science out of the labs and bring it closer to people, society and the world. Everyone must know what scientists are doing. We must be close to people, and this event helps make this possible”.

In his presentation, Artem Komissarov explained how neurons transport molecules and energy over long distances, and thus transmit information. He made a comparison with what Toyota did to build new prototypes: it pulled the best cars on the market apart in order to understand the role of each of its parts, and knowledge of the best pieces allowed it to innovate. “First we must understand the functions of the parts before rebuilding or copying”, he said.

According to Artem Komissarov, this can be applied to the processes of the brain, one of the human body’s least known organs: “After more than 100 years studying the brain, now is the time to make a copy of some of the processes it follows”. “We have spent a long time studying the functions of the molecules, and we now know that it is possible to see how they circulate and are transported. Chemistry can help rebuild these mechanisms”, he said in his presentation.

The other awards and the jury for the final

The second prize, awarded with 600 euros, went to Judith Vinaixa Forner (a student on the doctoral programme in Biomedicine), for “The importance of the stoma in pancreatic cancer”. The winner of the third prize, of 300 euros, was Aitor Mòdol Cano, also from the doctorate in Biomedicine, for his presentation “Cell signalling: learning to listen”. The Audience Award, worth 200 euros, went to Gerard Llorens de Cesaris (PhD in History), with “The rear mirror of history:  Spain and the United States, 1868-1874”.

The jury for the final was made up of Josep Joan Moreso, full professor of Philosophy of Law at UPF; Carmen Pérez, full professor at the Department of Translation and Language Sciences, and Fatima Gebauer, a researcher at the Center for Genomic Regulation (CRG).  The competition was presented by Manel Jiménez, academic director of the Center for Learning Innovation and Knowledge (CLIK).

At the end of the event, Núria Sebastián, director of the UPF Doctoral School, congratulated the winner, the runners-up and all participants. “It is important at least once a year to have the opportunity to find out that interesting research is being done by interesting colleagues from other departments and on other doctoral programmes”. Núria Sebastián encouraged the audience to get people to participate and explain their research, and also thanked the public in attendance, “a fundamental part of Rin4’”.

> Video of the presentation by Artem Komissarov