The Theodore Nierenberg professor of Economics at the Yale School of Management gave the lecture titled “Challenges for Competition Policy in the Digital Economy”, kicking off the 2022-2023 academic year at the UPF Faculty of Economics and Business. 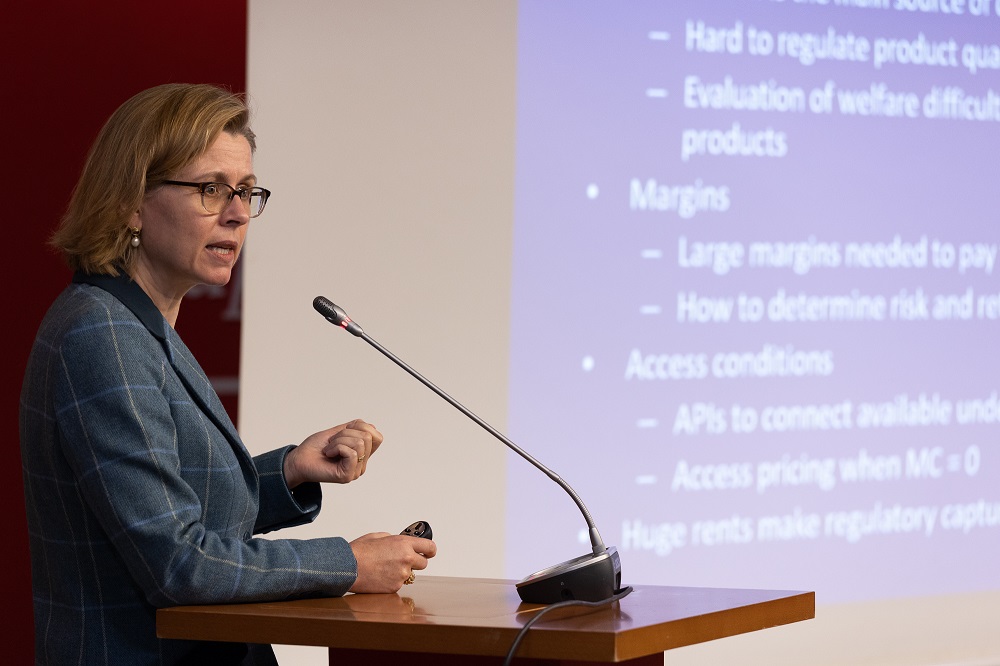 The new economy, the regulation of digital markets, the application of competition, the profound changes undergone and the challenges in this field, were the main threads of the 2022-2023 academic Economics Lecture, titled “Challenges for Competition Policy in the Digital Economy”, given by Fiona Scott Morton, a Theodore Nierenberg professor of Economics at the Yale School of Management (USA).

The 32nd Economics Lecture, which kicked off the 2022-2023 academic year of the University’s Faculty of Economics and Business, took place on 2 November at noon, in the auditorium of the Ciutadella campus, in the course of an event presided over by UPF rector, Oriol Amat. It was attended by Walter Garcia-Fontes, dean of the Faculty, and Rosa Ferrer, professor and researcher at the Department of Economics and Business.

After a welcome by rector Oriol Amat, Walter Garcia-Fontes stressed the importance of being able to return to normality in the wake of the pandemic, and underscored the virtues of face-to-face teaching: “Now we realize more than ever the privilege of being able to enjoy a face-to-face university, with all that this implies, and with the resources we have. Face-to-face teaching is essential, and cannot be replaced by any advanced technology”, he assured.

Walter Garcia-Fontes: “Our goal is to train flexible people, who can think about various issues, solve serious and unforeseen problems, and cope with uncertainties”

The dean stressed that the teaching given on the bachelor’s degrees of the UPF Faculty of Economics and Business is characterized by the prestige, reputation and academic rigour of the lecturers who are experts in their field. “Our goal is to train flexible people, who can think about various issues, solve serious and unforeseen problems, and cope with uncertainties”, he stated. This rigorous teaching model is also transferred to the field of research, in which “we have a highly competitive international faculty, at the forefront of various areas of knowledge”. 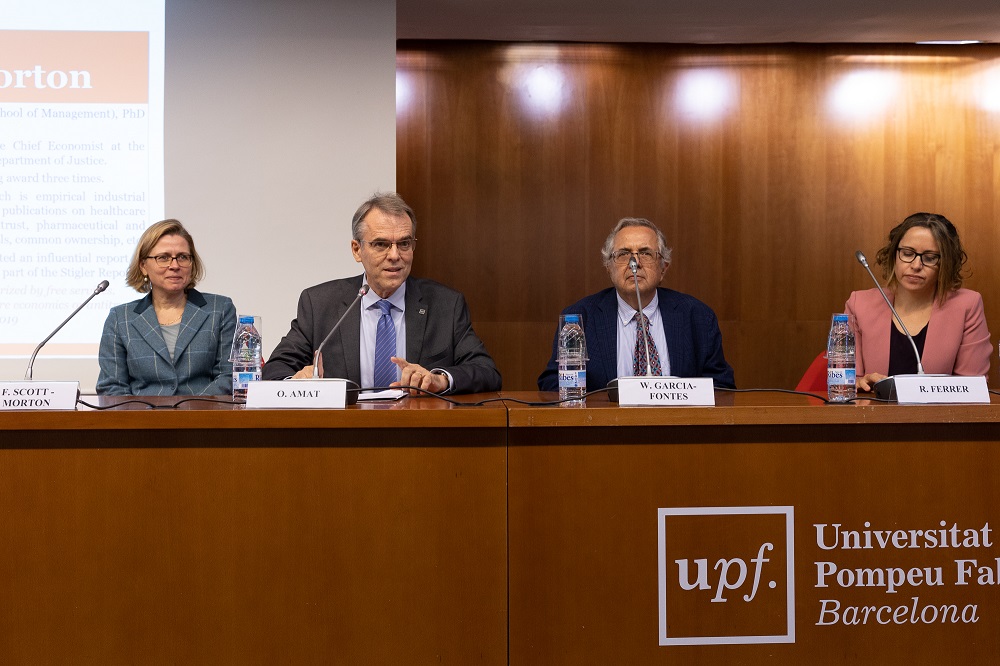 Rosa Ferrer, who liaised with professor Scott Morton during her visit to UPF and accompanied her during her stay in Barcelona, introduced the speaker, about whom she highlighted two things: first, that she is a person who is characterized by carrying out both teaching and research at the highest level: “Fiona is a clear example that performing both high-quality teaching and research is fully compatible”, she asserted.

Also, Rosa Ferrer mentioned the wide variety of topics and sectors on which the speaker is an expert, including market regulation, antitrust policy, and industrial organization, in various sectors such as pharmaceuticals, automotive or large technological platforms. Rigour and flexibility are characteristics of the tools she employs to carry out her task.

Fiona Scott Morton began her lecture by stating that the US, because of the non-interventionist movement of the Chicago School, has spent the past 40 years steadily regressing in the application of competition and allowing increasingly competitive behaviour: “In this context of regression, the economy has taken a leap forward. We have moved from the ‘industrial economy’ to the ‘new economy’, which is characterized by a fixed cost of innovation and product creation, and with an ecosystem of related markets. In this combination of reversal as the economy advanced, it created a great mismatch in the US, and to a lesser extent, in the UK and the EU”. 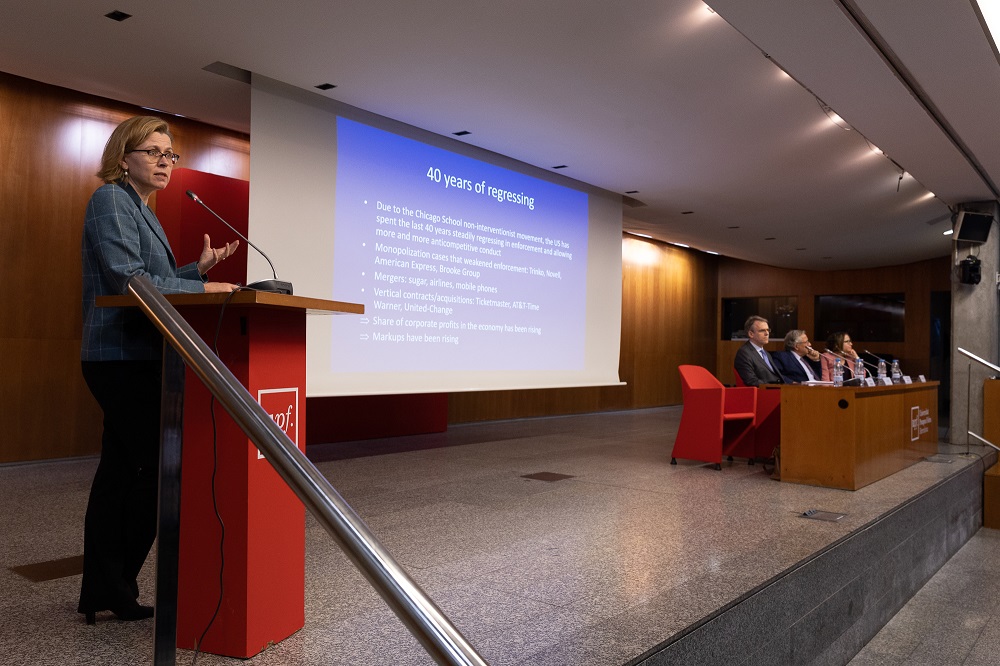 The speaker provided an analysis of this new economy, characterized by huge profits and low or zero marginal cost, network effects, high fixed costs, high differentiation, and markets where innovation is the main source of competition. “The new economy is a complicated environment for the enforcement of competition”, she opined.

Some of the features that characterize the markets of the new economy are dynamic and disruptive competition, the fact that product differentiation is fundamental and consolidation and market power are important. In this context, “the new economy requires a more vigorous, stringent and precise improvement and application of competition”.

With regard to regulation, Fiona Scott Morton noted that the new economy needs significant progress in this area and calls for stronger consumer protection. In this respect, she stressed that there are more opportunities for consumers to make mistakes, to have difficulties in understanding companies’ financial offer, and to evaluate digital advertising or make complaints.

In view of this problem, the economic agents and courts must take a step forward, in order to keep up with all these economic changes, and to be able to condemn certain behaviour and adopt new theories of harm, but they have not yet done so. What solution exists for this situation? Fiona Scott Morton assured that “new models and evidence provided by economists are needed, the agencies must take risks, the courts must internalize the fact that the models respond to a different economic reality, and that in general, it needs to be understood that the application of competition law is not anti-technological”.

In the final part of the lecture, the speaker analysed some examples of large companies and technology platforms, and monopolistic and anti-competitive practices that have been carried out in recent years, such as Amazon, App Stores or Google Search. She ended up praising the role that the economy can play (“it is a great tool!”), for all the players involved, but “it must be used with clarity and discipline, based on empirical evidence and cross-cutting work”. However, she ended up making a suggestion: “Don’t let the progress of empirical methods define the importance of a given topic”.

At the end of the lecture, and after a round of questions by the audience, Oriol Amat delivered the closing speech of the event. The rector explained that this 2022-2023 academic year there are 761 new students in the field of Economics and Business, including undergraduate, master’s and doctoral studies, and that on an international scale, UPF is highly recognized in this field, as evidenced by its prominent position in three of the most prestigious world rankings: Times Higher Education (position 85), Shanghai (position 40) and QS (position 24).

The rector, after recalling that besides being a research-intensive university, UPF also gives importance to teaching, as demonstrated by the new common educational framework EDvolution, he declared the 2022-2023 academic year of the UPF Faculty of Economics and Business officially inaugurated.

A trajectory marked by quality teaching and research, accompanied by transfer 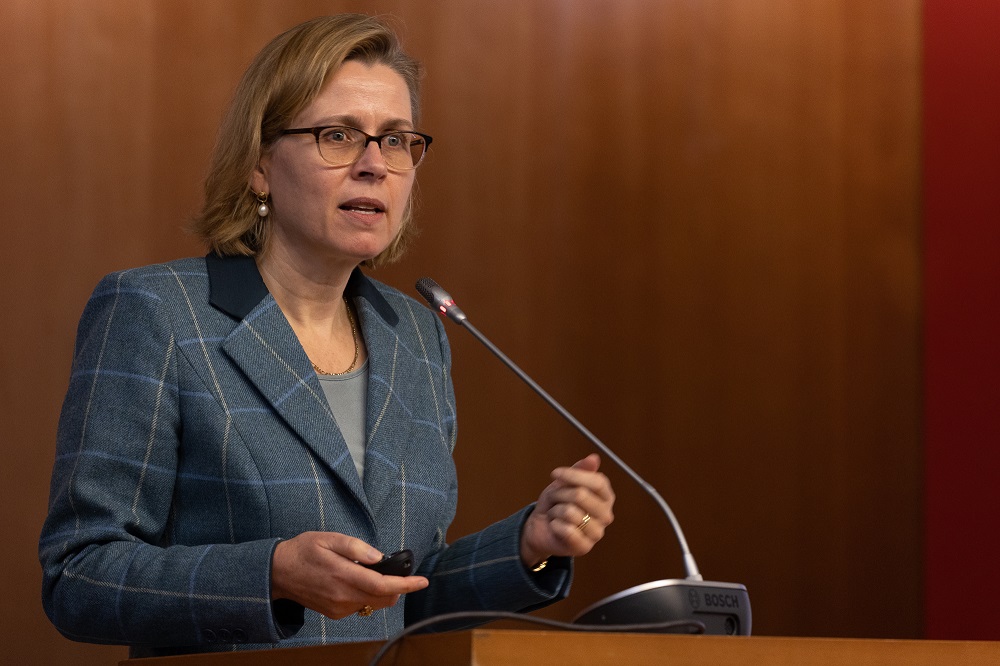 Fiona Scott Morton, a graduate in Economics from Yale (1989) and a doctor in this discipline from the MIT (1994) is a Theodore Nierenberg professor of Economics at the Yale School of Management. A member of the faculty since 1999, she was its dean from 2007 to 2010, and won the award for quality teaching at the centre twice. She founded and directed the Thurman Arnold Project at Yale, a means of offering more antitrust programmes and policy projects to students at this university.

Her area of academic research is industrial organization, with a focus on empirical studies of competition. In her academic work, she has championed the role of the US government in ensuring healthy competition in healthcare markets and the technology industry.

Between 2011 and 2012, professor Scott Morton served as assistant attorney general for Economic Analysis (chief economist) with the Antitrust Division of the United States Department of Justice, where she helped enforce the country’s antitrust laws.

An expert in digital market regulation, she coordinated part of the report on which the “Digital Markets Act (DMA)” is based, the European Commission’s proposed Law to complement antitrust intervention in digital markets in the EU, with a regulation in the form of a set of obligations targeting platforms. 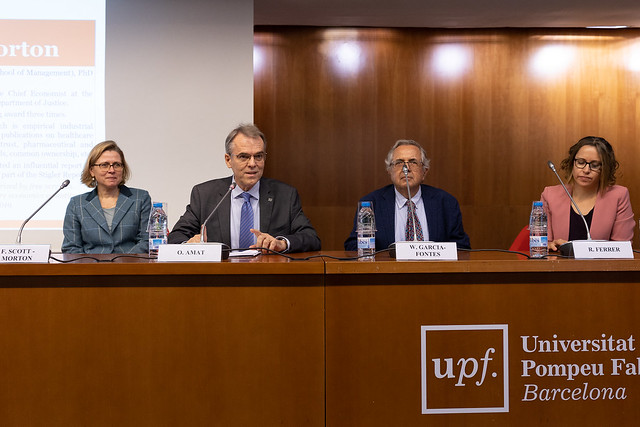