For the first time in Spain, research has access to the full records of couples affected by male gender-based violence - home_upf

For the first time in Spain, research has access to the full records of couples affected by male gender-based violence

For the first time in Spain, research has access to the full records of couples affected by male gender-based violence

Led by UPF researcher Jorge Rodríguez-Menés, and funded under the RecerCaixa programme, the ongoing research has found that a woman’s higher status than a man’s increases the risk of victimization. The project has studied the criminal and victimological records of a complete cohort of couples affected by gender-based violence, and aims to cross the data with the health and employment records of the same sample. 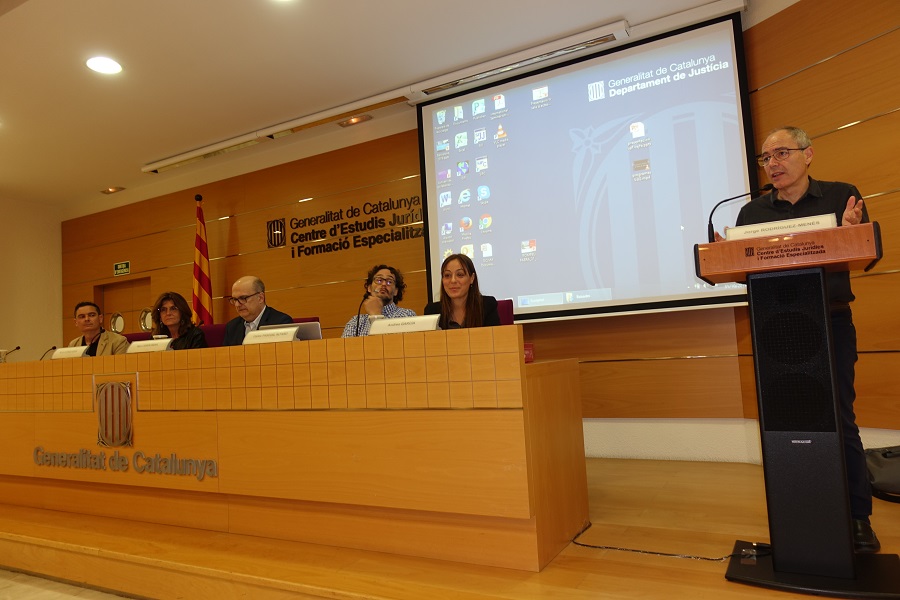 Jorge Rodríguez-Menés, adjunct Serra Húnter lecturer with the Department of Political and Social Sciences and member of the research groups in Demography and Sociology (DemoSoc) and Criminology and Penal System at UPF is the principal investigator of “An Integral Study of Intimate Partner’s Violence: Perpetrators, Victims and Their Relationships”. This project, which began in 2017 and is expected to be completed in March 2020, is funded under the Obra Social “la Caixa” RecerCaixa programme.

The results to date were presented in the course of an international seminar on gender-based violence against women in intimate relations, which was held on 30 and 31 October 2019 in Barcelona, organized by the DemoSoc and Criminology and Penal System research groups. During the seminar, which involved both academics and representatives of key institutions in the fight against gender-based violence in Catalonia, Jorge Rodríguez-Menés highlighted that for the first time in Catalonia and in Spain, it has been possible to study, duly anonymized, the lifetime criminal and victimological records of a complete cohort of couples affected by gender-based violence.

According to Jorge Rodríguez Menés, “the preliminary exploitation of these data, to which access and whose processing are difficult, has enabled establishing that the courses taught in Catalan prisons for perpetrators of violence against women that combine behavioural therapies with modules to raise awareness of gender equality and respect for women reduce the risk of recidivism more than other courses taken by these inmates, such as vocational training or detoxification therapies for those with addictions”.

Other results obtained so far have little impact on the effectiveness of short prison sentences in reducing recidivism, and on the importance of maintaining basic healthcare for the populations most vulnerable to gender-based violence, such as immigrant women.

In the course of the conference, UPF researchers reported their very advanced negotiations for the signing of an inter-institutional agreement between the Catalan Government’s Justice Department, CatSalut, the Agency for Health Quality and Assessment, the State Public Employment Service, the Catalan Employment Service, and Pompeu Fabra University. This agreement will allow crossing the criminal and victimological records of the population of offenders and victims of gender-based violence in Catalonia between 2010 and 2015 with the health and employment records of the same sample.

According to Jorge Rodríguez-Menés, “this will enable finding out, for example, if women victims of gender-based violence have a history of injuries and illnesses that precede the known victimitzations, which could have alerted the medical and healthcare personnel that attended to them of their vulnerability to suffering gender-based violence”.

Among the results presented, those concerning the importance of asymmetric power relations within the couple stand out. In contrast to the predominant theoretical viewpoint, which predicts higher risks of victimization in situations of greater economic and social dependence of the woman compared to her partner, the researchers showed that situations of inconsistency of status in which the woman’s status is higher than her partner’s most lead to conflict and the use of violence by the man.

Jorge Rodríguez-Menés provides a plausible explanation for these results, obtained by means of statistical analysis of several national and international surveys of victimization and conflict in the couple: “In patriarchal cultures, status inconsistencies generate male insecurity, which would lead them to resort more readily to violence to restore the traditional imbalance that favours them. Our results could help understand why, in societies where we are increasingly approaching gender equality, gender-based violence seems to rally”.

The research project “An Integral Study of Intimate Partner’s Violence: Perpetrators, Victims and Their Relationships” (2017-2020) received funding of nearly 96,000 euros in the 2016 announcement of the Obra Social “la Caixa” RecerCaixa programme, which enjoys the collaboration of the Catalan Association of Public Universities (ACUP).

The project, whose main goal is to analyse the risks of perpetrating and experiencing violence within an intimate relationship (Intimate Partner’s Violence, IPV), has adopted a comprehensive approach to the phenomenon, taking into account the characteristics of both the perpetrators and the victims, and their relations of interdependence and conflict.

Likewise, it seeks to provide professionals who are frequently in contact with offenders and victims (police, judges, medical personnel, etc.) with efficient instruments to detect and deal with this problem.