An article published in the journal PNAS involving the participation of Marco Madella, ICREA-UPF research professor and coordinator of the CaSEs research group, presents an analysis of data from multisensor satellites. The study, which has discovered over a hundred new archaeological mounds in a desert in Pakistan, provides highly valuable information for the creation of a regional map and database of heritage. 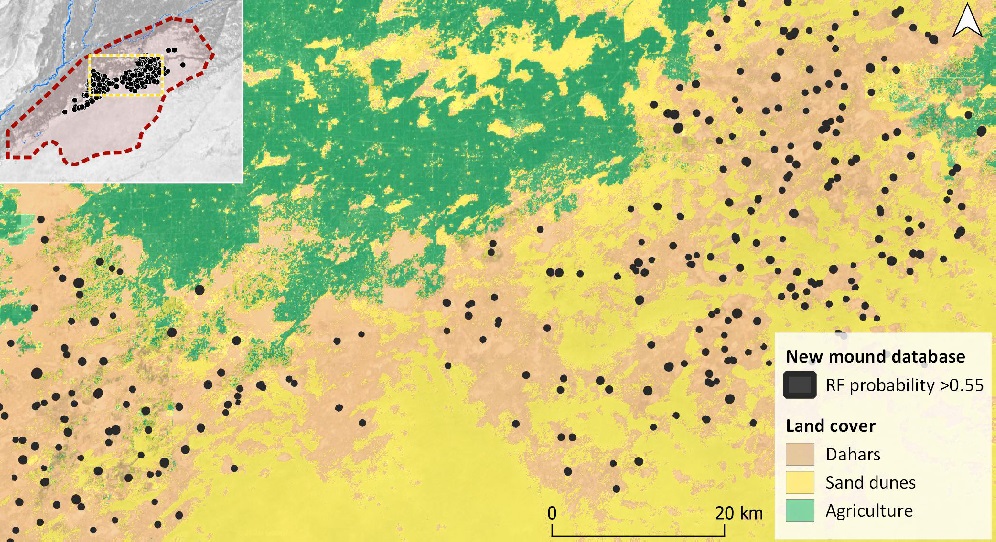 Today, archaeological sites across the world are rapidly lost due to the expansion of agricultural land, urban development and conflicts. Moreover, it is very important to detect and record heritage in areas of difficult access due to technical difficulties, as may occur in deserts, or due to political problems, for example during conflicts.

The ability to detect archaeological sites in complicated places by means of a methodological approach, especially in areas with little vegetation, can help to establish preliminary maps of heritage and protection “hot spots”, even in the world’s most remote or inaccessible places.

"The new method provides results that are noticeably superior to the use of single-source RS approaches”.

Collaboration between the Complexity and Socio-Ecological Dynamics (CaSEs) research group of the UPF Department of Humanities and the Department of Archaeology at the University of Cambridge (UK), along with the Catalan Institute of Classical Archaeology (ICAC) and the Institute of Earth Sciences Jaume Almera (ICTJA) at the CSIC, has enabled making progress in this line.

The analysis of a new set of data retrieved from multisensor satellites, has recently been published in the journal Processing of the National Academy of Sciences (PNAS), based on a study presenting the first combination of multitemporal, multipolarization, and multiangle SAR bands and multitemporal optical bands (including visible, red-edge, NIR, and SWIR.

The study, led by Hector A. Orengo (ICAC, first author of the article and principal investigator, PI) and Cameron Petrie (University of Cambridge, also PI), has involved the participation of Marco Madella, ICREA research professor at the UPF Department of Humanities and coordinator of CaSEs, in addition to four other authors from the collaborating institutions.

Data from multisensor satellites were analysed using a machine learning algorithm on a cloud computing platform to detect and analyse archaeological mounds, which has the potential to transform and enable the location of the sites.

The machine learning algorithm used was able to detect all previously-known mounds in the study area, for which the researchers managed to re-establish their precise locations as well as find a great many new mounds, beyond the expectations set out in previous research. “The new method provides results that are noticeably superior to the use of single-source RS approaches”, the authors affirm.

Analysis of a desert in Pakistan, with the location of hundreds of new settlements

The example that the authors included in the published article has allowed them to locate hundreds of new settlements is the Cholistan desert in Pakistan, an area currently difficult to visit but rich in archaeological remains dating back at least to the Bronze age.

The  new distribution of archaeological sites in the Cholistan Desert, in combination with legacy archaeological data, suggests that most of these mounds are protohistoric settlements, that extended across a larger area than previously recognized. They include several previously unknown mounds some of which probably represent urban settlements of the Indus Civilization.

The archaeological data, together with landscape analysis, including the mapping of factors that affect the visibility of the site, suggest that these mounds were only a relatively small part of those present there. Many of them might be underneath the large dunes of the Cholistan desert.

The detection of the mounds, from small (less than 5 hectares) to large (over 30 hectares), suggests that there were population displacements in this area of desert. According to the authors, these shifts are likely to reflect responses to a dynamic and changing hydrological network with a consequent decrease of water in these rivers and the influence of progressive desert encroachment northwards. This was a long-term process, which culminated in the abandonment of part of the settled area during the Late Harappan period.

The study, which is serving as the basis for new research on the population dynamics of the Indus Civilization (from 3,300 to 1,500 BC) provides valuable information for the creation of a regional map and database of heritage.

“The results of our study have important implications for understanding the archaeological importance of the region”, conclude the authors, who highlight that this is the first regional approach for detecting and recording archaeological heritage through satellite images.