For the first time it has managed to break into the global top 10 of this classification. The THE Young University Rankings 2020, which include a total of 414 centres under fifty years old, puts Pompeu Fabra in first place in the Spanish state and fifth in Europe.

The two most prestigious and most renowned international rankings of universities put UPF among the world’s best young universities. Both rankings were announced today, 24 June, and certify the improvement by the institution. UPF is 10th in the THE Young University Rankings, improving on last year’s position entering the world top 10 for the first time.  In the QS World University Ranking 50 under 50 it is ranked 28th, also improving by climbing four positions.

Times Higher Education (THE), which produces one of the most prestigious and influential university rankings in the world, has published the 2020 edition of the ranking of young universities entitled “Young University Rankings”, which includes the top 414 institutions worldwide (63 more than in the previous edition) under 50 years old.

In what is now the ninth edition of the ranking, for the first time, UPF breaks into the top ten ranking 10th best young university in the world.

The results of the ranking were published today in the framework of the Young Universities Summit held by Times Higher Education online. The meeting involved Jaume Casals, UPF rector, and Manel Jiménez, commissioner for education and communication projects at UPF.

“It is an unprecedented event with no possible point of comparison in our environment. My duty right now is to thank my colleagues at the University for their extraordinary hard work and effort”

Jaume Casals, UPF rector, appraised the results and said that “it is an unprecedented event with no possible point of comparison in our environment. My duty right now is to thank my colleagues at the University for their extraordinary hard work and effort. Our resources and our capacity to compensate fall far short of this global recognition”. He added: “I would also like to dedicate our success to the president of the Catalan Government and his ministers, and also to the president of the government of Spain and his ministers, inviting them to seriously consider the world of the university and its research and innovation as a necessary priority in all optimistic policies concerning economic and social development that is compatible with justice, equality, culture and global wellbeing”.

A ranking that adapts

In drawing up the ranking of the best young universities, Times Higher Education uses the same indicators (a total of thirteen) it uses in the global ranking, in the 2020 edition of which UPF came 143rd overall. However, the ranking of young universities gives less weight to indicators related to reputation, so as to reflect as faithfully as possible the characteristics of younger institutions. 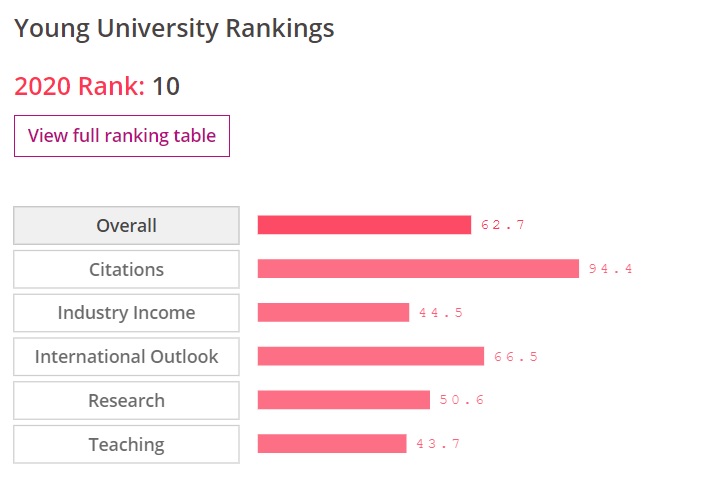 The five major dimensions of indicators based on which the ranking is produced have a different specific weight: teaching (30%), with several variables related to the overall teaching process, such as the ratio of students per teacher or the institution's academic reputation; research (30%), obtained from the volume of revenue through research, scientific output, and the reputation of the institution in this field.

The three remaining dimensions are citations received (30%), with the aim of measuring the influence of research results;  international outlook (7.5%), with ratios that measure the ratio of local versus international students and lecturers, as well as international cooperation with other institutions; and industry income (2.5%), from the transfer of knowledge.

Today, the QS World University Ranking 2021 50 under 50 was also released. This classification, which includes the 150 most highly valued universities in the world less than 50 years old, UPF improved on last year’s results climbing four positions to come 28th. In addition, in the standings the University also ranks first in the Spanish State and seventh in Europe.