A study reveals that they mainly consist of Internet search engines and recommendations by family and friends. It is published by members of the Department of Communication and the Department of Political and Social Sciences in the journal El profesional de la información. 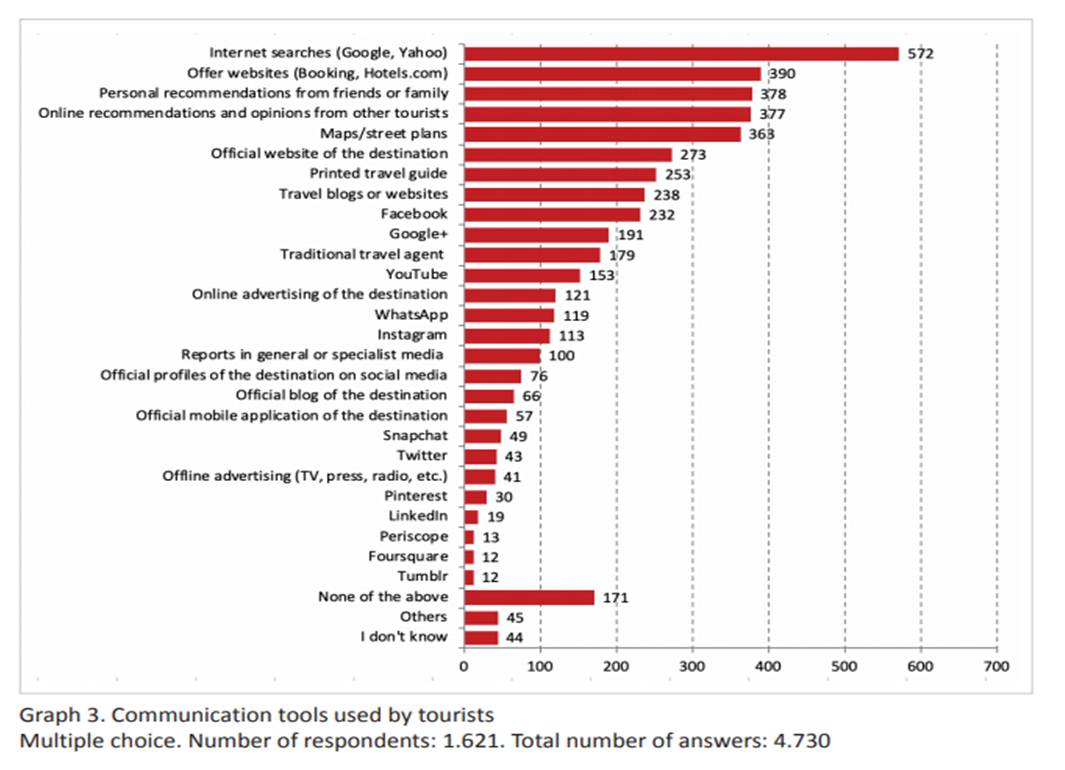 The tourism industry is extremely important for the economy as it accounts for 10.4% of world GDP, although this percentage varies greatly from country to country. In the case of Spain, it provides 14.6% of GDP, the third biggest area, only behind trade and financial services.

Tourist destinations apply branding techniques for promoting themselves, in a similar way to brands of commercial products. To carry out these and other tasks, Destination Marketing Organizations (DMO) are set up to promote regions’ tourist attractions. Tourist destination managers’ promotion tasks include designing effective communication strategies. For this, they need to know what sources of information tourists actually resort to at the different stages of their trip.

In recent years, communication by tourist destinations has been gradually abandoning the traditional channels (adverts on TV, radio and in newspapers, brochures, advertising in travel agencies) and has come to rely massively on digital channels, mainly the official website of the destination (Pedraza-Jiménez et al., 2013), social media and smartphone applications (Fernández-Cavia et al., 2017).

Previous studies considered information habits before, during and after the trip. This study includes a fourth, prior stage; choosing the destination

Previous studies have addressed this issue, but analysing a very limited number of sources and looking only at the information in the three classic stages of the trip (pre-, during and post-). A recent study has conducted a survey which includes a fourth, prior stage; choosing the destination.

This study comes under the framework of the iTourist project by José Fernández-Cavia, Sara-Vinyals Mirabent and Rafael Pedraza-Jiménez, members of the research group in Communication, Advertising and Society (CAS) and of the UPF Department of Communication; Wiebke Weber, a researcher at the Research and Expertise Centre for Survey Methodology (RECSM) of the Department of Political and Social Sciences at UPF, and Ariadna Fernández-Planells of the Polytechnic University of Valencia, published in El profesional de la información.

To study tourists’ habits when searching for information when choosing a destination, they proceeded to design a survey targeting international travellers, aged over 14, who had visited Spain in the last three years. The researchers enquired as to the use of 27 information sources on a sample of 1,621 tourists, representative of Spain’s four major markets: Germany, France, Italy and the UK.

Habits when searching for information for choosing a destination

The two most important aspects for tourists in preparing the trip are accommodation and transport to the destination. Also interesting are the results for both transport at the destination and the preparation of unguided tours, for which tourists must spend more time and pay greater attention in their planning.

In preparing the trip, the two most important aspects for tourists are accommodation and transport to the destination

“We have seen that Internet is clearly the first option for more than half of respondents, being the main communication channel through which they prepare a trip, at least in the case of Spain for its main source markets”, the authors of the study suggest.

“Travel agencies still retain some role in the process, although with what may be considered lesser importance, at least with regard to tourists from the European countries analysed. What is surprising, however, is the lack of importance of telephone communication, which some years ago accounted for a significantly higher percentage”, they add.

The results confirm the importance of Internet search engines in the phases of choice of destination and preparation of the trip, but also point to the importance of recommendations by friends and family in the choice stage, of maps and plans for the actual trip itself, and of Facebook, following the trip. It is also shown that among destinations’ official channels, only their websites appear among the sources consulted.