Xavier Freixas wins the 2018 King James I Award for Economics

Xavier Freixas wins the 2018 King James I Award for Economics

The full professor of Financial Economics and Accounting and director of UPF’s Department of Economics and Business was awared with the prestigious award, endowed with 100,000 euros. 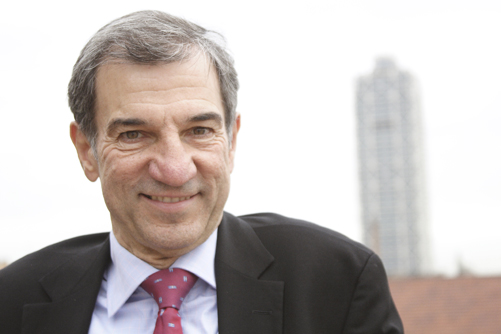 Xavier Freixas Dargallo, full professor of Financial Economics and Accounting and director of UPF’s Department of Economics and Business was awarded the prestigious King James I award in the Economics category “for his research focusing on banking and for being one of the world’s leading experts in financial economics, and especially in the micro- and macroeconomics of the banking system”.

The King James I awards, this year are in their 30th edition, are called by the foundation bearing the same name. The winners were announced during an event which took place on Tuesday 5 June at the Palace of the Generalitat (Government) of Valencia, presided by Ximo Puig, head of the regional executive.

Endowed with 100,000 euros for each of its six categories (Economics, Basic Research, New Technologies, Environmental Protection, Medical Research and Entrepreneurship of 2018) the members of the jury, which consists of 80 people, include eighteen Nobel laureates. The awards will be delivered during the last term of the year, at a ceremony that will be presided over by the king at the Valencia Merchants’ Exchange.

The jury made special mention of Xavier Freixas for being “one of the first and main promoters of the study of informational asymmetries in the credit market, highlighting the role of banks in the evaluation and monitoring of companies and private individuals to whom they grant credit”.

They also took into consideration his academic career during which he has been a consultant to the World Bank (WB), the International Monetary Fund (IMF), the Federal Reserve Bank of New York and the European Investment Bank (EIB). It also highlighted his co-authorship of the book “Banking Economics” together with Jean-Charles Rochet, which has become a reference work in this field.

Jordi Galí, professor of Foundations of Economic Analysis of the Department of Business and Economics and director of the CREI-UPF, received the same award in its 2004 announcement.

An expert in banking theory

Xavier Freixas Dargallo, born in Barcelona 69 years ago, received his doctoral degree in Economics from the University of Toulouse (France) in 1978. His expertise focuses on the financial markets, banking supervision and regulation and banking theory. This theory consists of the creation of small economic models in which the behaviour of various players is considered in order to help banks and regulators to understand the impact of these hypothetical measures.

At UPF, where he currently directs the Department of Economics and Business, a position he has held on previous occasions, he was also dean of the Faculty of Economic and Business Sciences (2004-2008). He is a member of the executive committee of the master’s degree in Finance at the Barcelona GSE and coordinator of the research group in Financial Economics and Accounting (CREFC). As a research fellow of the Centre for Economic Policy Research (CEPR), his main areas of investigation are the financial markets and banking supervision and regulation.

Some of the awards he has received throughout his career are the Jacobs Award for the best research paper (1998); the distinction of the Catalan Government for the promotion of university research (2002); the Barclays Global Investors (BGI) Michael Brennan Award, for the best article published in The Review of Financial Studies (2006); and the IEF Award for Financial Excellence in an Academic Career (2013), among others.