Christiane Nüsslein-Volhard, Nobel Prize in Physiology or Medicine, was invested on 12 July with an honorary doctorate by UPF in a ceremony presided over by Oriol Amat, UPF rector, in the auditorium of the PRBB. The laudatio speech was given by Cristina Pujades and her patron was David Comas, both professors with the Department of Medicine and Life Sciences. 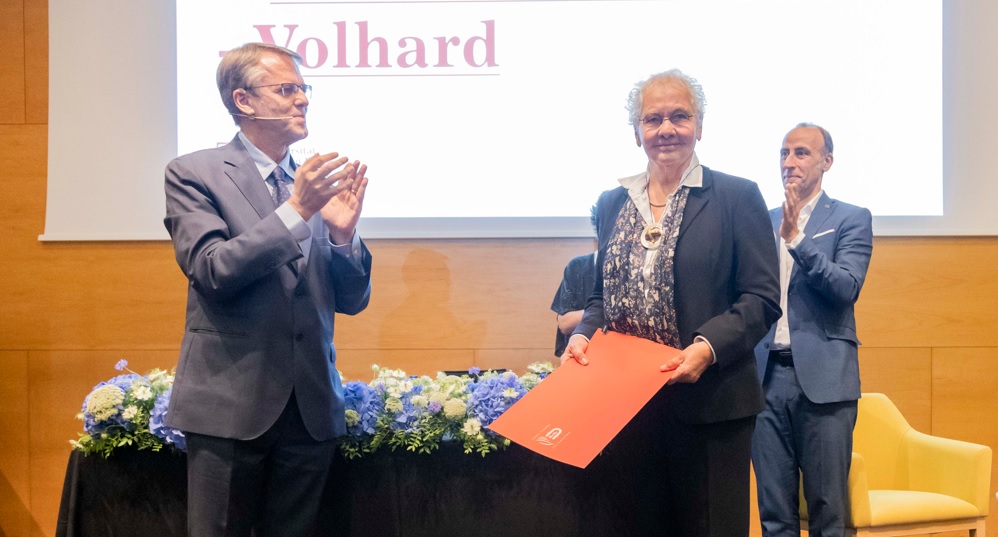 Christiane Nüsslein-Volhard, a specialist in Developmental Biology and 1995 Nobel Prize in Physiology or Medicine, was invested honoris causa by UPF on 12 July in a ceremony held in the auditorium of the Barcelona Biomedical Research Park (PRBB). The event was followed live on the University’s website and through social networks with the hashtag #NüssleinVolhardHonorisUPF.

It was presided over by UPF rector, Oriol Amat, who was accompanied at the presidential table by Montserrat Vendrell, president of the Board of Trustees, and Laia de Nadal, vice-rector for Knowledge Transfer.

Also present were Cristina Pujades, a full professor of the Department of Medicine and Life Sciences (MELIS-UPF) who gave the laudatio speech, and David Comas, also a full professor and former director of the same Department, acting as patron to Christiane Nüsslein-Volhard. The event included a musical performance involving flute, soprano and piano.

She is the eighteenth person to have been invested honoris causa by UPF, since Desmond Tutu was first recognized (1999-2000) through to Angela Y. Davis in March (2020-2021 academic year), the fifth woman.

UPF has recognized the career of an exceptional researcher who has contributed to the discovery of general principles of embryonic development. Her work has enabled identifying the genes that control development in living organisms, shedding light on large areas of biology and medicine and, among others, her contribution to the state of the art earned her the Nobel Prize in Physiology or Medicine in 1995.

She is the eighteenth person to have been invested honoris causa by UPF, since Desmond Tutu was first recognized (1999-2000) through to Angela Y. Davis in March (2020-2021 academic year), the fifth woman.

Welcome and justification of the awarding of the honorary doctoral degree

“The Governing Council, at the proposal of the Board of the Department of Experimental and Health Sciences and the Faculty of Health and Life Sciences, agrees to grant the title of doctor honoris causa by Pompeu Fabra University to Dr. Christiane Nüsslein-Volhard, in recognition of her exceptional research career that has enabled identifying the genes that regulate the development of living organisms and discovering general principles of embryonic development. Dr. Christiane Nüsslein-Volhard is, moreover, an example of honesty and of the commitment of scientific research to society.”

A video was then screened outlining the researcher’s main scientific contributions, while showing the illustrational process of an image of Nüsslein-Volhard, by Miriam Rivera, an alumni of the bachelor’s degree in Human Biology from UPF and scientific illustrator.

In recognition of her exceptional research career that has enabled identifying the genes that regulate the development of living organisms and discovering general principles of embryonic development. She is also an example of honesty and of the commitment of scientific research to society.

Cristina Pujades, a full professor with the UPF Department of Medicine and Life Sciences, read the eulogy of the doctorand, reviewing the major scientific contributions made by Christiane Nüsslein-Volhard.

Laudatio of Christiane Nüsslein-Volhard as doctor honoris causa, by Cristina Pujades (in English in pdf.)

Excerpts from the laudatio speech

Prof. Nüsslein-Volhard has been interested for many years in how complexity arises from basic patterns, and she was not afraid to undertake immense challenges to pursue this question.

Prof. Nüsslein-Volhard predicted that developmental mechanisms were so basic that they had to be evolutionarily conserved, and that genetics would lead the path to the logic of biological systems. This is, in my opinion, one of the most revolutionary ideas in biology, and another of the scientific pillars that paved the future road to travel. Prof. Nüsslein-Volhard wanted to go beyond the evident and thus investigated the logic of embryo construction. For this purpose, she aimed at combining genetics and developmental biology. The rationale was that the function of a gene can be deduced from the effects produced by its deletion, a simple but powerful concept.

Their work set a turning point in the field, beautifully demonstrating that genes controlled the logics of embryonic development, and that there was a sequential gene hierarchy. Although the screens were initially driven entirely by curiosity, the mutants now serve as models for many human diseases, once more showing the importance of fundamental scientific research for health sciences.

One big question emerged after the flies’ work: were those genes and mechanisms applicable to other animal species? In particular, do vertebrates use similar strategies? Thus, in the middle of her success in the discovery of the molecular mechanisms governing Drosophila embryonic development, Prof. Nüsslein-Volhard explored whether a fish, such as a zebrafish, could eventually be explored like the fly for the genetic analysis of vertebrate developmental genes and decided to test whether it could be used for the same strategy as for Drosophila. In doing so, she anticipated zebrafish as one powerful vertebrate model organism for genetics. She demonstrated that the basic mechanisms in the construction of an organism are pretty much conserved among species.

I will not end without a brief note on the impact of Prof. Nüsslein-Volhard’s commitment to closing the gender gap in science. It was witnessing and experiencing these gender inequalities that, in 2004, prompted her to set up a foundation that gives support to talented young women scientists who have children, with the aim of increasing the contribution of highly qualified women to cutting-edge science in Germany.

I would like to finish by emphasizing the importance of Prof. Nüsslein-Volhard as one of the intellectual pillars of Developmental Biology, a pioneer scientist who explored and developed new concepts and intellectual frameworks, a leader who promoted long-term projects of great value and has mentored top scientists. And above all, an extraordinary woman who worked to make science a space for intellectual debate where all of us may play a part. 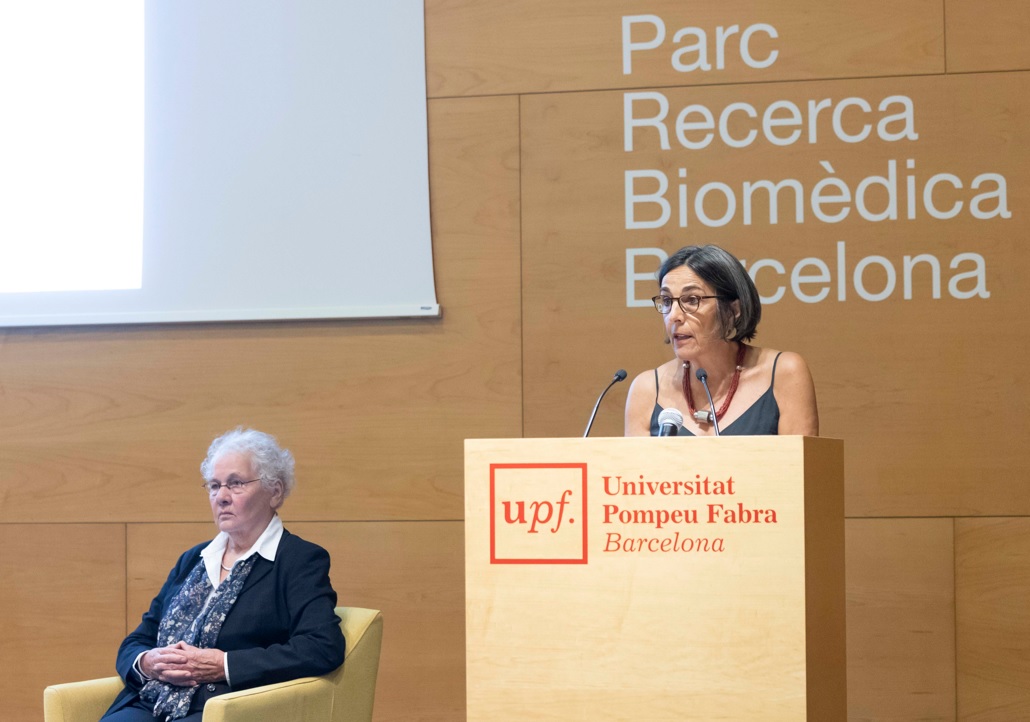 The most solemn moment of the ceremony was the investiture of Christiane Nüsslein-Volhard as an honorary doctor. “The Governing Council of Pompeu Fabra University has appointed her doctor honoris causa, in testimony and recognition of her relevant merits. By virtue of the authority invested in me, I deliver this medal, a symbol of this title, and the diploma”, the rector stated.

He then added: “as you have now joined this University, please now receive, on behalf of your Senate of Doctors, the fraternal embrace by those who are honoured and happy to be your brothers and sisters and companions”, applauding her as a sign of recognition by the entire university community. 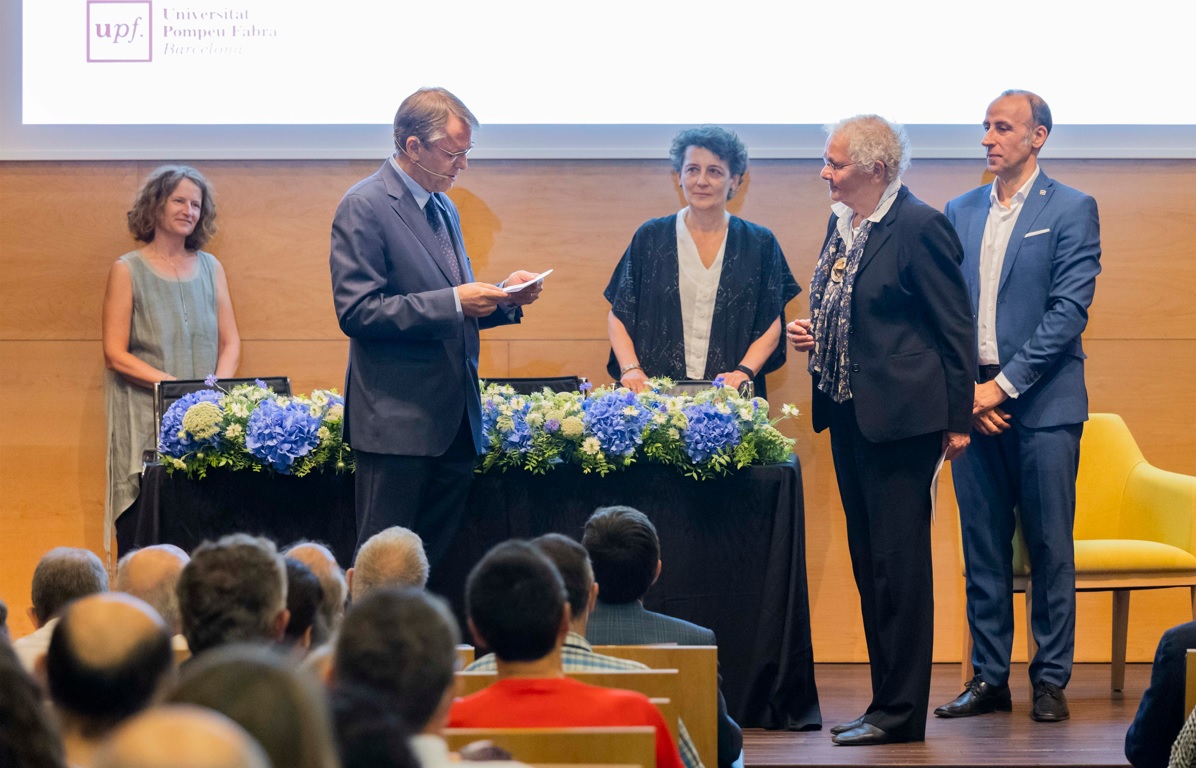 After the laudatio speech came an artistic interlude, the performance of Der Hirt auf dem Felsen (The Shepherd on the Rock), D.965 for soprano, flute and piano, by Franz Schubert; performed by Patricia de No on flute; Carmen Paula Romero, soprano; and Viviana Salisi, on piano.

Christiane Nüsslein-Volhard gave her acceptance speech, in which she reviewed the key moments of her scientific career. She made special mention of colleagues and collaborators who have contributed to her findings over the years. Finally, she outlined her most recent line of research, which focuses on the pigmentary patterns of the zebrafish.

Excerpts from the speech

Christiane Nüsslein-Volhard is a specialist in developmental biology and Nobel Prize winner in Physiology or Medicine in 1995 for her “discoveries concerning the development of the embryo.”

Professor Pujades’ laudatio acknowledges her scientific accomplishments in Developmental Biology and Genetics and biology in general. She also emphasizes her role as a scientific mentor and her commitment to closing the gender gap in science.

At UPF, in the biomedical sciences, there is an approximately equal number of female and male graduate, PhD and postdoctoral students. However, the transition to leadership roles after the postdoctoral stage is biased, with only approximately 25% of women achieving a principal investigator position. The department’s Gender Action Plan includes several strategies to reverse this trend with the ultimate goal being to develop a programme similar to the ProFiL programme (Professionalization of Women in Research and Teaching: Mentoring – Training – Networking), which aims to support highly qualified women scholars in their quest to attain a full professorship.

A noteworthy achievement is the work developed under the Christiane Nüsslein-Volhard Foundation to encourage young female scientists to pursue careers in research, by providing them with financial support and assistance with childcare.

As professor Pujades said: “She was generous enough to start the Foundation with her own funds” and “this foundation has inspired many institutions like our own Department of Experimental and Health Sciences, that has pioneered the establishment of this kind of allowances for young female scientists in Spain”.

The event ended with the performance of “Gaudeamus igitur”, the traditional university anthem, sung by the UPF Choir, conducted by Aida Vera. 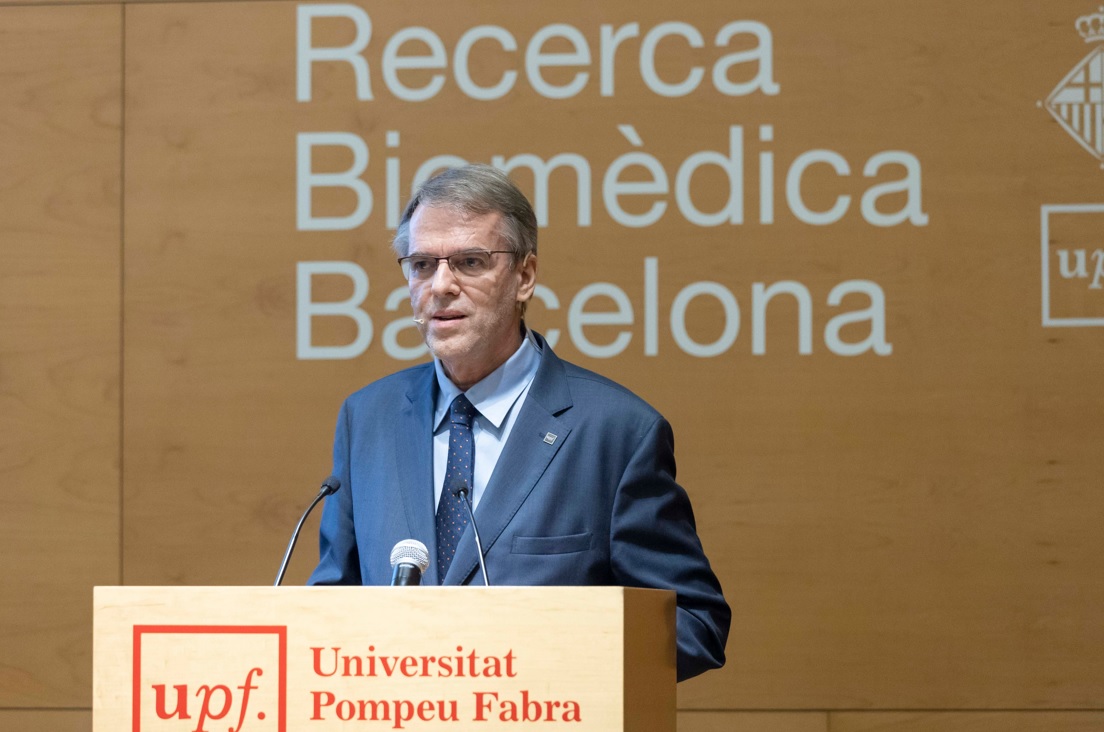 Photo album of the investiture ceremony 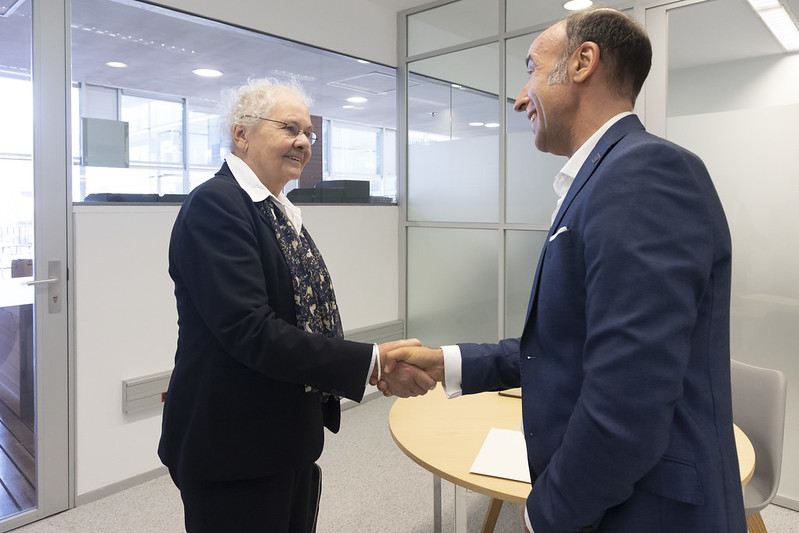 On the occasion of the honoris causa, the Library has prepared a virtual bookshelf with a selection of the most outstanding works by Christiane Nüsslein-Volhard. Among them are the books “Animal beauty on the evolution of biological aesthetics” and “Coming to life: how genes drive development”.

A Vision of the research that revolutionized developmental biology 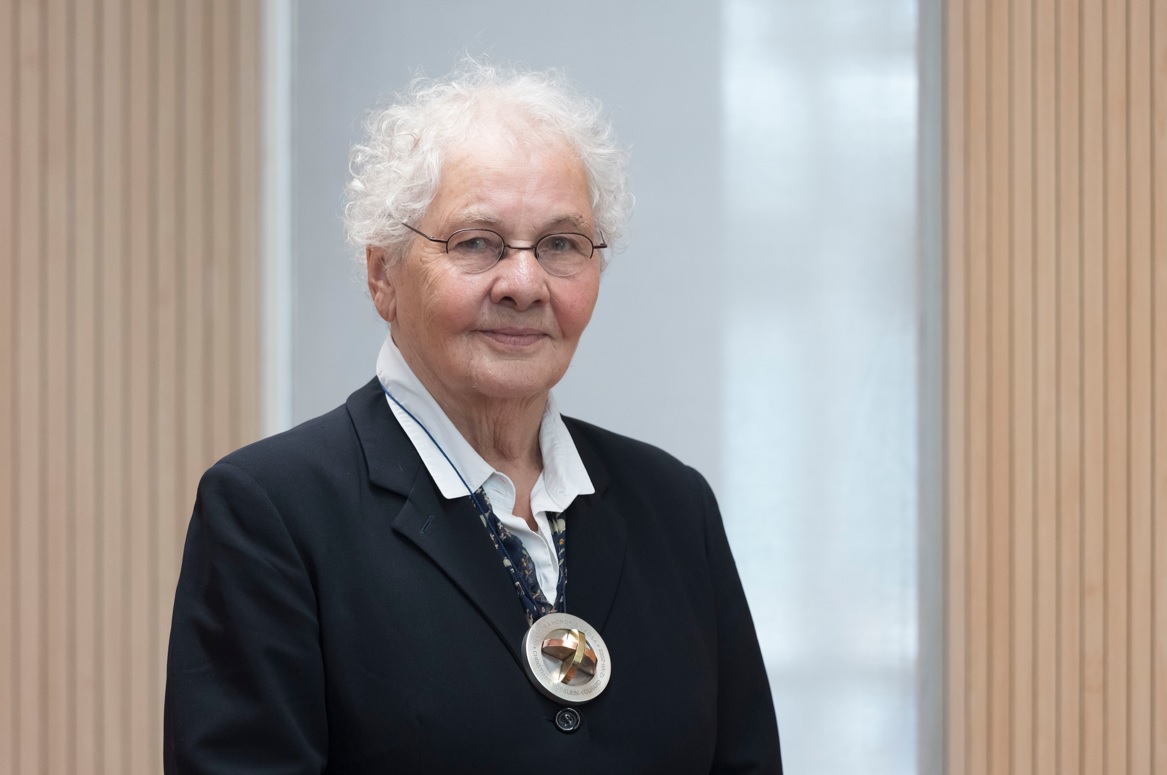 Christiane Nüsslein-Volhard, born in Magdeburg (Germany), studied Biochemistry and obtained a PhD in Genetics in Tübingen (Germany). After conducting her postdoctoral research in Basel (Switzerland) and Freiburg (Germany), she established herself as a group leader at the European Molecular Biology Laboratory (EMBL). She later returned to Tübingen, where until 2014 she was director of the Max Planck Institute for Developmental Biology.

Christiane Nüsslein-Volhard’s research has helped to explain one of the major questions of biology: the mechanisms that allow a single cell to become a complex organism. In these organisms, life begins when a fertilized egg divides and forms new cells that, in turn, also divide. Initially, these cells look identical, but over time they begin to change. In a process regulated by genes, some will form the heart and others, for example, the brain.

Her work has signified a major milestone in developmental biology. She developed and combined genetic and embryological tools to study drosophilia and zebrafish mutants: and this allowed her to discover the genes that direct early development.

In the 1970s, she began to study the genetics of fruit fly development (Drosophila melanogaster). Until then, most genes had been discovered by chance; however, with Eric Wieschaus, they systematically tested all genes potentially involved in embryo development. Through mutagenesis experiments, they managed to identify and classify fifteen genes of interest of the 20,000 studied, which are responsible for dividing embryos into segments. They then completed their first study with a catalogue of 120 genes that direct the complete development of the fly embryo.

For this discovery, she received the Nobel Prize in Physiology or Medicine in 1995, together with Eric Wieschaus and Edward Lewis, for their “discoveries concerning the development of the embryo”. She was the tenth woman to receive a Nobel Prize for science.

In addition to the Nobel Prize, she has received numerous awards such as the Albert Lasker Award for Medical Research (United States), the Louis Jeantet Prize for Medicine (Switzerland), and the Ernst Schering Prize (Germany). She has been the general secretary of the EMBO and has also published several books such as Zebrafish: In Practical Approach and Coming to life: How Genes Drive Development.

Other aspects should also be highlighted, such as the creation in 2004 of a foundation named after her, with the aim of encouraging young German women scientists to engage in research, offering them financial support and childcare.