Virtual reality to fight the anxiety of public speaking - Archive

Virtual reality to fight the anxiety of public speaking

Virtual reality to fight the anxiety of public speaking

Different studies have shown the effectiveness of Virtual Reality in reducing stage fright, but to date it had not been tested using distractors. Emma Rodero, a professor at the UPF Department of Communication, has published research that analyses examples of possible distractors so that students can reduce their degree of anxiety when speaking in front of an audience.

Public speaking is a necessary activity in both academic and professional life. Doing it well, however, is a skill that needs training as there are very few people who do not feel fear, or even panic, when speaking in front of an audience.

In a study conducted in 2016, researchers from the Federal University of Minhas Gerais in Brazil found that 63.9% of a sample of 1,135 university students said they were afraid of speaking in public and 89.3% said that receiving training on this would be highly beneficial. Thus, several universities have begun to train their students, who often have speak in public in academic and professional environments, in the art of speaking well in front of an audience and to learn oral communication skills.

The director of the UPF Media Psychology Lab at the Department of Communication and specialist in oral communication, Emma Rodero, and professor Olatz Larrea of the Department of Philology and Communication at the University of Barcelona, have published a study in the journal Revista Comunicar in which they use virtual reality (VR) tools with examples of possible distractors for students to reduce their anxiety when talking in front of an audience. “Keeping calm and controlling one’s nerves is very difficult to achieve if there are external actions that interrupt my speech”, Rodero says. “These distractions can be, for instance, someone making an unexpected noise, a phone ringing, someone moving, and having to deal with the unpredictability of question time”.

The results of electrodermal activity showed that the group that used virtual reality technology reduced the level of anxiety more compared to the control group.

The researchers recruited 100 students (58 women and 42 men) who were divided into two groups, a control group that received the usual course on public speaking, and an experimental group who also received training with Psious virtual reality technology. Psious was used to recreate a virtual environment where the number of people in attendance, silence or noise generated, and the attitude of the audience could be modified; and second, different types of distractions could be caused. 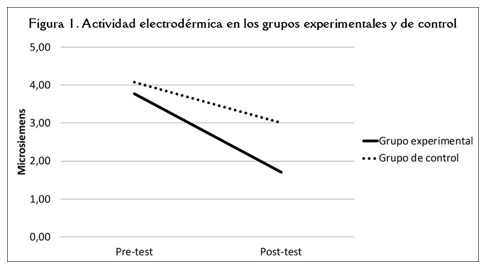 Three types of distractors were employed: a person in the audience coughing, a person getting up from their chair and leaving, and, during question time, a person posing a difficult question. To measure anxiety before and after the test, they used the Public Speech Anxiety Scale (PSA) by Bartholomay and Houlihan (2016), and recorded electrodermal activity (EDA) to measure physiological levels of PSA. “We attached electrodes to the students’ hands to measure the sympathetic nervous system and thus record the anxiety levels shown”, she explains. “It was very important to obtain this measure as it is a reaction that the students cannot consciously control and with this we can gain an objective record of their anxiety”.

The results of electrodermal activity showed that the group that used virtual reality technology reduced the level of anxiety more compared to the control group.

“The most stressful moment was at question time”, Rodero continues. “It's a time we cannot control. The presentation greatly depends on us and our control of anxiety. A complicated question put harshly can also cause a lot of stress. In view of this, we can confirm that virtual reality training allows students to get used to these distractors”.

The researchers were also interested in studying gender differences, which had hitherto not received much empirical attention in studies of this type. “No study to date had compared the electrodermal activity of the skin during public speaking in men and women”, the authors comment in the study. “Since most self-perceptive studies conclude that women display greater anxiety than men, we expected to find a higher level of anxiety among women”.

“The results did not confirm this hypothesis as it was the men who recorded a higher level of anxiety in the physiological response”, Rodero explains in conclusion. “The possible explanation is that most of the studies that have been conducted previously were self-reports where subjects were consciously asked about their anxiety. In this case, men tend to underestimate their state of anxiety because it is frowned upon for men to appear as being nervous. Conversely, women tend to overestimate their state of anxiety. This might explain the differences found between a conscious measurement by means of a question and the unconscious physiological reaction. It is a topic that we will need to investigate further in the future”.

The research was funded through the UPF PlaCLIK grant programme under the EDVolution Common Educational Framework whose main goals are to put the student at the centre of their learning and highlight all teaching innovation projects and initiatives.