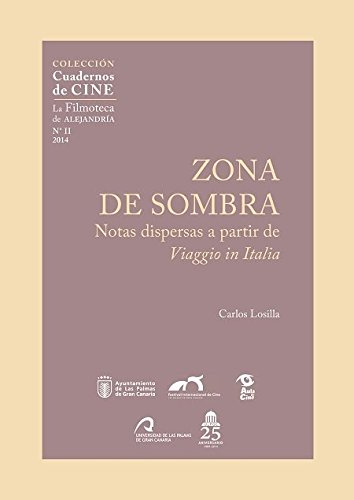 This book grows out of a course organized by the ULPGC's Aula de Cine and the Festival Internacional de Cine de las Palmas de Gran Canaria: four recent films that purposely cite a fifth one filmed now sixty years ago, Viaggo in Italia by Roberto Rossellini. Why is it always said that this movie 'marks the beginning of modern cinema'? It may be only a sentence, but a secret lies within: it's always written in present simple. It is never said that this 1954 movie 'marked' that beginning, which makes you think that 'modern cinema' is still there to educate us in uncertainty. But there is no doubt that, when navigating through the history of cinema, we always end up coming back to Viaggo in Italia. The itinerary chosen by Carlos Losilla on this essay is so personal, so free that the writer cannot help but behold his own writing as another person's: 'the voice walking through it comes from here and there, from the mess within the relationship between the movies that appear and that are watched as a suggestion of a few images mixed together and that you then have to separate’.