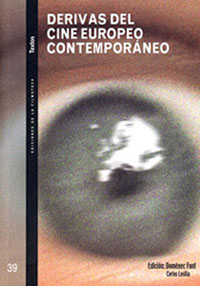 Contemporary European cinema, truly a crossing of cultures, is performing nowadays the same role once played by the Hollywood cinema. Whereas in the thirties and forties film-makers such as Austrian Fritz Lang, British Alfred Hitchcock or the French Jean Renoir sought refuge in the United States to bring to its limits an aesthetic approach conceived in their respective countries of origin, today David Lynch (Inland Empire), Abel Ferrara (Mary), Hou Hsiao-hsien (Le voyage du ballon rouge) or Nobuhiro Suwa (Une couple parfait) come through Europe —the continent must be regarded as a passing land— in order to abduct its cultural history and transform it into something else, a place for creation where everything is allowed. And, at the same time, the most irreducible European film-makers gather the heritage of modernity and take it to these boundary lines with higher boiling points.

On the one hand, their path is not only followed by the most veteran ones, but it is also reinvented at every step: the French Jacques Rivette, Alain Resnais o Claude Chabrol; the Italian Marco Bellocchio; the Portuguese Manoel de Oliveira... all of them insist on a creative spiral that keeps on setting tendencies. On the other, younger directors keep on surprising every day, they incorporate an inalienable inheritance in the framework of new ways of expression: there are seismic movements in diverse European zones —from Germany to the Eastern countries, from Portugal to Spain itself, where nobody would have said a few years ago that it would be possible to create anything close to a ‘new cinema’. Chaotic and unpredictable, faceless and without identity, free and full of vitality: these are the paths that make up current European cinema and which Derivas del cine europeo contemporáneo ('Drifts of Contemporary European Cinema') aims to map.