Scientists find pioneer cells in the neural development of the ear

Scientists find pioneer cells in the neural development of the ear

According to a study published in the journal eLife, the cells that trigger neurogenesis in the inner ear are outside of this tissue, migrate inwards, and promote the formation of more neurons.

The inner ear is responsible for our senses of hearing and balance and is made up of a series of fluid-filled cavities. Sounds and movements of the head cause the fluid within these cavities to move and to activate sensorial neurons that will pass on information about the sounds or head movements to the brain. Damage to these neurons can result in deafness or vertigo. But where do the neurons themselves come from?

For years, it was thought that all inner ear neurons developed inside an area of the embryo called the inner ear epithelium. The cells in this region were thought to activate the gene neurog1, triggering a series of changes that turn them into inner ear neurons. However, using advanced microscopy techniques in zebrafish embryos, the team led by Berta Alsina, group leader of the Morphogenesis and Cell Signaling in Sensory Systems Lab now shows that this process starts earlier, with the arrival of external cells to the epithelium.

Although they do not have external ears, zebrafish do possess internal ears that give them the senses of balance and hearing and that are similar to those of other vertebrates, like humans. Zebrafish embryos are also transparent, which means that the activation of genes and cell movements can be directly visualized. 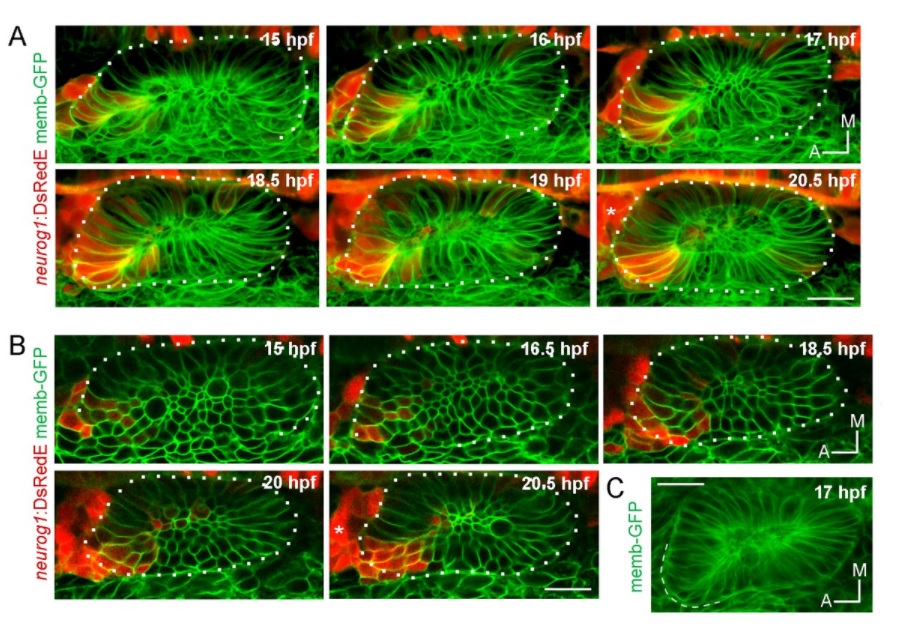 Through real-time images of zebrafish embryos (what the scientific community calls 4D imaging), the researchers show that the first cells to activate neurog1 do so outside the inner ear epithelium. These pioneer cells then migrate into the inner ear epithelium and activate on neurog1 in their new neighbouring cells. A substance called fibroblast growth factor (FGF) is responsible for telling the inner ear epithelium to let the pioneers enter, thus controlling the final number of inner ear neurons. “We have identified a new cell group that act as pioneers in the ear’s neurogenesis”, says Esteban Hoijman, author of the study and researcher at Alsina’s lab. And he adds, “these cells have two essential functions: they constitute the first specialized cells of the otic epithelium and promote the specialization of the cells residing in the inner ear”. According to Alsina, this is a major novelty in the field of neurogenesis, since “it is the first example of neural progenitors instructing the specialization of other progenitors”.

The work led by Alsina reveals how the coordinated activation of genes and the movement of cells give rise to inner ear neurons. This provides insights into the mechanisms that generate other types of sensory tissues, such as eyesight or the sense of smell. In the long term, these advances may be crucial for the design of new strategies for repairing damaged sensory nerves, like in deafness.