A new level of complexity to HIV latency - News

A new level of complexity to HIV latency

A new level of complexity to HIV latency

The study, published in Frontiers in Microbiology, reveals a mechanism by which the virus may remain in a latent state. 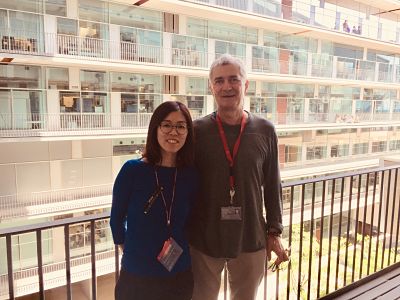 Human Immunodeficiency Virus (HIV) latency, its ability to remain dormant within infected cells and thus invisible to antiviral drugs and the immune system, is a major hurdle to curing HIV infection.

Now, researchers from the Infection Biology Laboratory at UPF, the  IrsiCaixa AIDS Research Institute and the National Institute of Infectious Diseases (NIID) in Japan, have discovered a mechanism by which HIV may escape from latency reversal and thus remain in a dormant state.

During the HIV infection cycle, the virus integrates its viral genome via reverse transcription into the chromosome of the host cell. The plus strand of this integrated provirus codes for all information needed to generate more virions. However, the antisense strand is also transcribed but its importance is not fully understood.

In their study now published in Frontiers in Microbiology, the researchers, led by Yasuko Tsunetsugu-Yokota, explored the relationship between sense and antisense transcription in HIV. They observed that some of the latently-infected cells expressed antisense transcripts which exhibited suppressor activity and locked the integrated provirus in a non-reactivable state. Andreas Meyerhans, ICREA research professor at UPF, explains “This study not only defines a new type of latent HIV-infected cells but also hints at novel therapy options”, something he and his fellow ICREA research professor Christian Brander at Irsicaixa have been exploring for a while now.

Interestingly, increased antisense transcripts may lock HIV latency and thus keep the virus dormant and devoid of detrimental effects for the immune system. In addition, the authors propose that anti-sense viral-encoded RNA could be targeted by cytotoxic T cells. Thus, by enhancing antisense transcription and vaccinating infected individuals with antisense-encoded proteins, infected cells may be eliminated before they ever become virus producers. This is a strategy that is under evaluation for the other human retrovirus, HTLV. “A clinically feasible way to continue investingating along these lines, however, has yet to be defined”, concludes Mie Kobayashi-Ishihara, first author of the study.