A study conducted in animals shows that epigallocatechin-3-gallate may improve cardiac and cognitive problems related to Williams-Beuren syndrome. The paper, published in the journal PLOS ONE, was led by Victoria Campuzano, a researcher at Pompeu Fabra University and at the Biomedical Research Networking Centre on Rare Diseases. 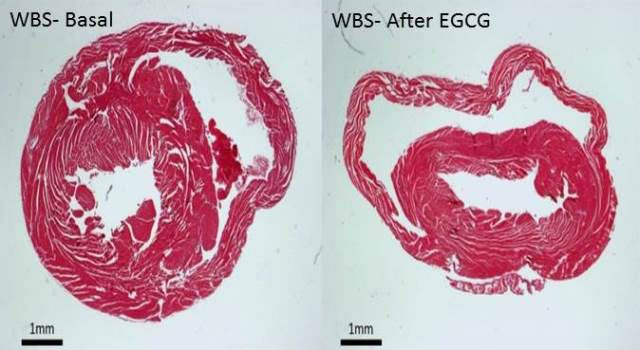 Williams-Beuren syndrome (WBS) is a rare disease with an incidence of approximately 1 in 10,000 that involves a series of brain and heart disorders. Cardiovascular complications account for the most serious health problems for sufferers who in addition present cognitive disorders. The molecular cause is the deletion of 26 to 28 genes in the 7q11.23 chromosomal region.

In previous studies, epigallocatechin-3-gallate (EGCG), the most abundant catechin in green tea, has been associated with possible benefits in different cardiovascular and cognitive diseases. Based on these results, the scientists investigated the effects of EGCG in WBS animal models.

In this study, the team led by the researcher Victoria Campuzano of the Genetics Unit at UPF, of the Biomedical Research Networking Centre on Rare Diseases (CIBERER) and of the Mar Medical Research Institute (IMIM) shows that EGCG may improve cardiac hypertrophy and some cognitive alterations in animal models of Williams-Beuren syndrome.

“We use a mouse model that mimics the most common deletion found in patients with WBS and presents most of the neurological features of the disorder along with some cardiovascular manifestations that lead to cardiac hypertrophy”, Victoria Campuzano explains.

The researchers conducted a preclinical test in mice in which green tea extracts were dissolved in drinking water, starting in three different periods (prenatal, youth and adulthood). Then they conducted a series of behavioural tests and various histological and molecular analyses to examine the effects of treatment.

“EGCG is a natural compound that acts by stimulating the Nrf2 pathway, and we manage to increase the expression of the organism’s endogenous antioxidants”, says Paula Ortiz-Romero, first author of the paper and a doctoral student at the Department of Experimental and Health Sciences (CEXS) at UPF.

“Altogether, our results suggest that EGCG may have a therapeutic effect and/or play a preventive role for WBS, which encourages us to continue with our research”, Victoria Campuzano concludes.

The study also involved the participation of CEXS researchers Francisco J. Muñoz and Luis A. Pérez-Jurado together with Cristina Borralleras, Mònica Bosch-Morató, Biuse Guivernau and Guillermo Albericio, who were researchers with UPF and the IMIM during the course of the research.

The study was funded by the Government of Catalonia and the Spanish Ministry of the Economy and Competitiveness.