Shakespeare’s “The Tempest”, the centrepiece in the Christmas 2020 celebrations, steeped in culture

Shakespeare’s “The Tempest”, the centrepiece in the Christmas 2020 celebrations, steeped in culture

Several members of the Theatre Workshop performed excerpts from the work of the English playwright and compered the virtual event, which included speeches by Jaume Casals, UPF rector; Montserrat Vendrell, chair of the Board of Trustees, and officers from four centres affiliated to the University. The event featured performances by the UPF Choir, a performer with the Chamber Orchestra and the winner of 2019 Sant Jordi competition in the musical composition category. 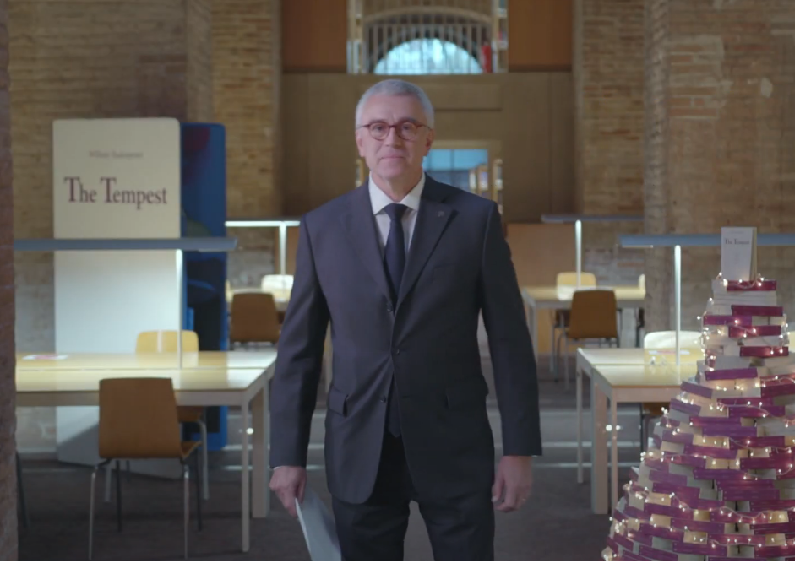 The Tempest, by William Shakespeare, is the work that took centre stage at the University’s traditional Christmas celebrations, which could be watched on the UPF website at midday today, 17 December, held online for the first time due to the pandemic. Several members of the UPF Theatre Workshop presented the event from different areas of the University’s three campuses (Ciutadella, Poblenou and Mar); other colleagues explained the plot and performed several excerpts from the work by the English playwright.

The Tempest, which was one of Shakespeare’s last theatre plays, is the backbone of the UPF culture programme for the 2020-2021 academic year, on the initiative of the UPF-Barcelona School of Management (BSM-UPF) and Pompeu Fabra University. These two institutions have promoted a new edition of the work, which can be acquired by all members of the University community, around which a series of creative, participatory and cultural outreach activities have been organized for the coming months.

The Tempest, which was one of Shakespeare’s last theatre plays, is the backbone of the UPF culture programme for the 2020-2021 academic year

The work has been translated by Salvador Oliva with contributions by three professors of the University. Javier Aparicio Maydeu, Culture delegate and full professor with the Department of Humanities, wrote the introductory note; Arcadi Navarro, full professor of Experimental and Health Sciences, the foreword, and Mercè Oliva, a professor with the Department of Communication, provided the epilogue.

This is the fourth consecutive year that the Christmas event has a classic as its thread, after Voltaire’s Candide; Bartleby, the scrivener, by Melville, and Machiavelli’s The Prince, proof of the University’s desire for culture to permeate the institution transversely and play a prominent role as a complement to science and as an agent for social transformation.

An artistic part and a section of institutional sepeeches

The event consisted of two parts: the first, filled with musical performances by the UPF Choir (who rendered “The Seal Lullaby”, by Eric Whitacre and “Hoy comamos y bebamos”, by Juan del Encina); Pilar Guarné, a regular featured musician with the University Chamber Orchestra, who performed the 3rd movement of Beethoven’s Sonata no. 17 on the piano, whose title is “Tempest”, commemorating the 250th anniversary of the composer’s birth; and Roger Padrós, alumni of the bachelor’s degree in Business Management and Administration and winner of the Sant Jordi competition in 2019 (for musical composition), who played his theme “Estels” (stars) on the piano.

The second part included speeches by various officers from UPF and from four of its affiliated centres, recorded from the emblematic Dipòsit de les Aigües building. Speeches were given by Oriol Amat, dean of the UPF-Barcelona School of Management; Olga Pané, manager of the Mar Health Park; Albert Carreras, ESCI-UPF director; Alicia Romero, vice-chair of the TecnoCampus Mataró-Maresme Foundation; Montserrat Vendrell, chair of the UPF Board of Trustees, and Jaume Casals, UPF rector.

> Video containing all of the institutional speeches (11.18 min)

> Excerpts from the speech by Jaume Casals

“Sometimes we ask ourselves which is the voice of a university, such a large organization involving so many people”.

“Time unites things past and future. It also unites them to demonstrate that not being able to speak, out of respect for everyone, is not a good argument”.

“Literature, which contains time, a real life, pushes us to think that indeed institutional and personal dignity resemble each other”.

“What Rabelais’ giant invites his giant son to think could be determined in many theses. A huge mountain of theses. For example: learning without tears, respecting talent, accepting debate, adapting personal commitment to professional commitment, keeping the team spirit, nurturing a good mood... “

“I see them grow, simple, fair, airy roses, in our motto: global well-being, and make of the motto an illusion, almost one of those dreams that, when we awaken, we wish to continue experiencing”.

The virtual event ended with the presentation and screening of the 2020 Christmas carol, a work by Carlos Batllo, UPF Alumni of Audiovisual Communication, an audiovisual montage focusing on Shakespeare’s The Tempest, an invitation to dream of a better future.

The members of the Theatre Workshop, directed by Pep Anton Gómez, who presented the 2020 Christmas celebrations, are Mireia Labazuy, Ela Matassini, Fabrizio Méndez, Estela Pérez and Iris Tur; the plot of The Tempest was explained by Pau Torres, Joana Justícia, Pau Alemany and Maria Quintero, and various excerpts from the work were performed by Eva Picazo, Gerard Gil, Mateu Mir and Anna Maillo.

The singers of the UPF Choir, conducted by Aída Vera, who took part in the two pieces, are as follows (including the members of the last term of the 2019-2020 academic year and the first of the 2020-2021 academic year):