That is the evocative and descriptive title of a massive open online course (MOOC) offered by UPF. A Catalan sign language (or LSC from the Catalan) learning initiative that has received funding from the Catalan Agency for Management of University and Research Grants (AGAUR), in just two editions, the course has already attracted nearly 9,000 students.

The dissemination to society at large of LSC, the native language of Deaf and Deaf-Blind people in Catalonia, is one of the goals UPF was pursuing in 2007, when it proposed that LSC be included in its programmes in the field of translation and language sciences. Implementing a global project to encourage people to disseminate, learn and research the language helps the university better fulfil its social function, in this case, the integration of this group into its community.

UPF has played an important role in making this happen. As an institution, it has set itself the goal of making the signing Deaf members of its community, including teaching staff, administrative and service staff, and students, more visible, for instance, by naturally adding LSC interpreting to relevant events, such as senate sessions or graduation ceremonies. 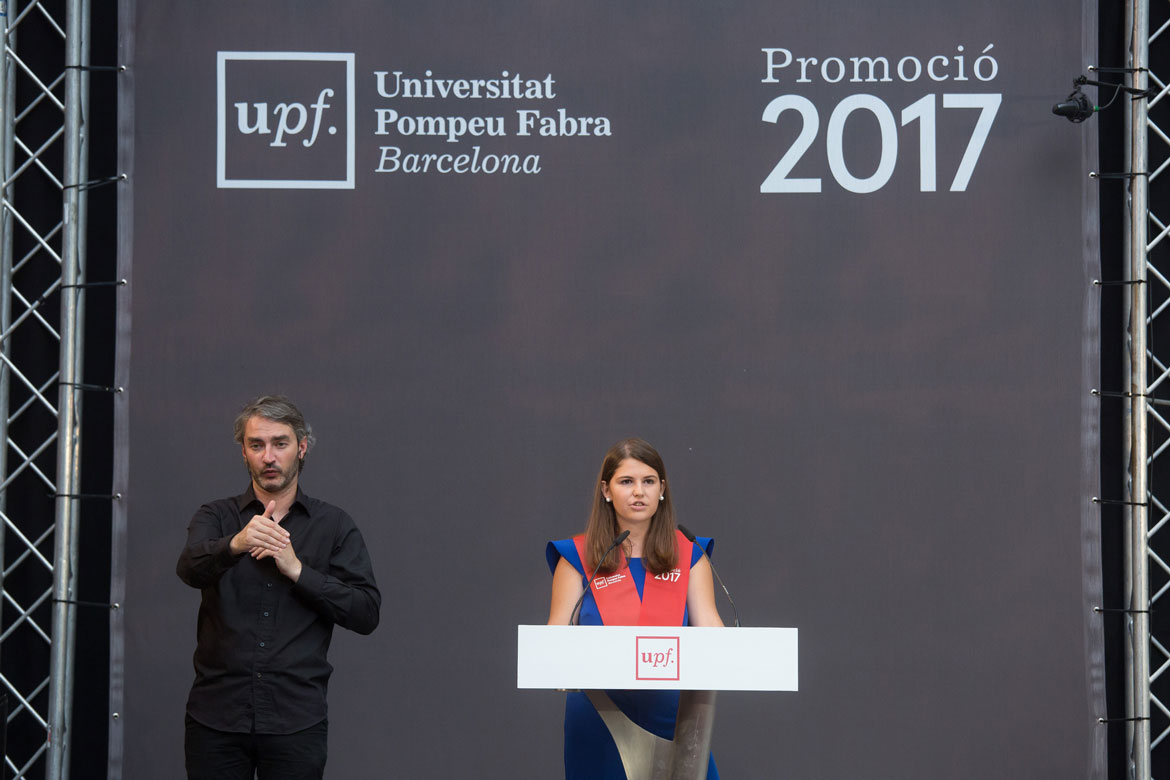 ‘Introducing LSC as a language of study at the university level, governed by the same rules as any other language, is a unique commitment, not only in Catalonia, but almost worldwide’, stressed Cristina Gelpí, vice-rector for teaching projects at UPF.

‘Studying it, encouraging people to learn it and use it more widely, reflects the university’s traditional social commitment’, she continued. ‘Promoting it entails an added element compared to other languages, as it is a minority and minoritized language.’

This firm commitment took on concrete form in 2008, under an agreement with the Catalan Federation of Deaf People (FESOCA), which enabled the incorporation of LSC into UPF’s bachelor’s programme in Translation and Interpreting, and, subsequently, in 2009, into the bachelor’s programme in Applied Languages. The relationship with the Federation, however, dates back further. In 2003, UPF and FESOCA jointly launched the postgraduate course Expert in LSC Interpreting.

Thus, UPF has become the only Catalan university to offer its undergraduate students the option of specializing in LSC, with the same time requirements and course load as the other languages offered:  English, French and German.

The Catalan signing community is quite large, consisting of around 25,000 people. Of these, 12,000 are Deaf, but ‘few go to school in their native language, few make it to university, and the job market available to them is mostly limited’, Gelpí explained. ‘That is why we need the population in general, and the university community in particular, to learn about and close the gap with the reality of the Deaf community.’

To this end, the Translation and Language Sciences area at UPF promotes initiatives to expose different groups to LSC. Examples of this include the UPF-FESOCA Prize for Catalan Sign Language or the organization of a summer course in the framework of the university’s Junior Campus, both aimed at secondary school students.

The presence of LSC at the university is rounded out by an entire ecosystem built around the Formal Linguistics Research Group (GLIF), led by the ICREA researcher Josep Quer, which encompasses the Catalan Sign Language Laboratory (LSC Lab).

A new structure with a lot of muscle 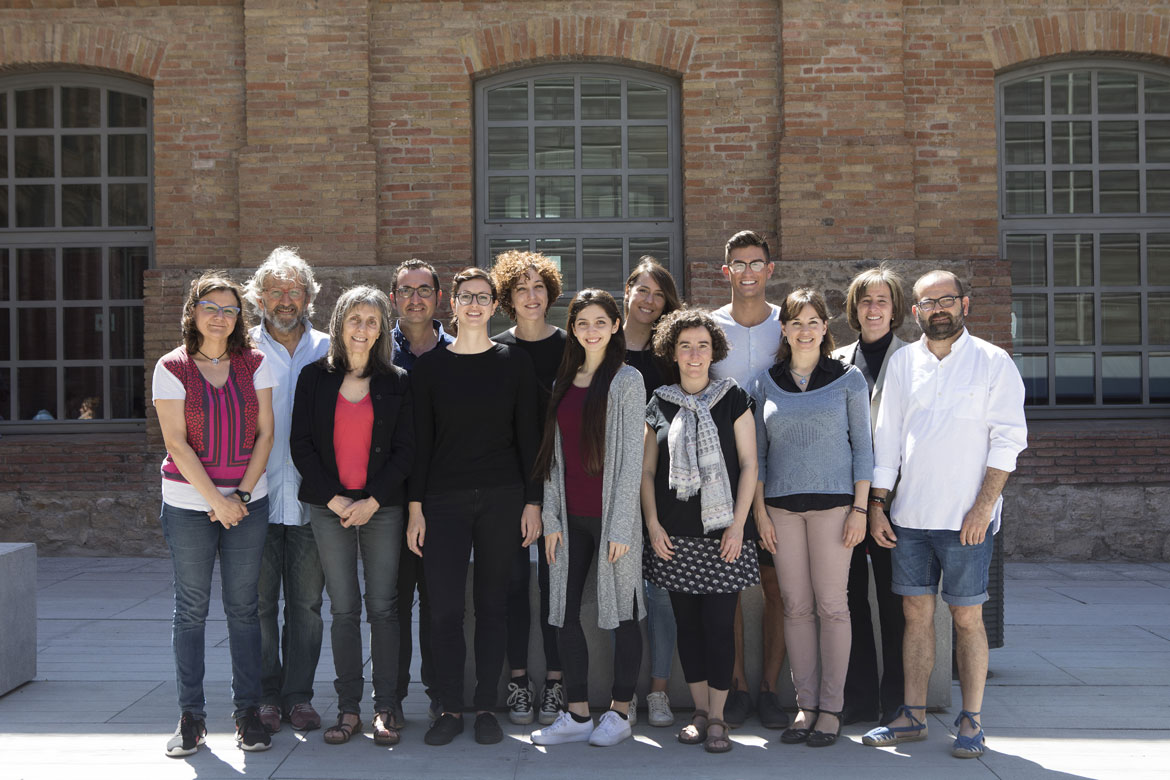 Now UPF has taken another step: last February, the university created the Centre for Catalan Sign Language Studies (LSC UPF Actua), in recognition of the many years of constant work in this area. In the words of Gemma Barberà, its coordinator, the new centre is intended ‘to consolidate the university’s uniqueness and help to formally position it as a benchmark national and international institution’.

‘We are doing highly cross-disciplinary work in the field of LSC, and we needed to set ourselves up under an umbrella that united and represented the unique and global project we are’, Barberà continued.

The importance of research on LSC

‘Because of its status as a minoritized language, little research is conducted on LSC compared to oral languages, such as Catalan, Spanish or English’, explained Quer, a leading expert in the field at the university level. In 2006, he was appointed scientific director of the Gramàtic bàsica de la llengua de signes catalana (Basic Grammar of Catalan Sign Language) by the Institute of Catalan Studies (IEC).

This has a significant negative impact that affects learning of the language. ‘When the grammar of a language, whether LSC or any other, is not well known, it means the materials used to teach will also have shaky foundations, and teachers and trainers have to work with ad hoc resources they make themselves’, Quer said. He continued, ‘It is also very difficult to assess the linguistic competence of a signer, and to determine language deficits when they are detected.’ 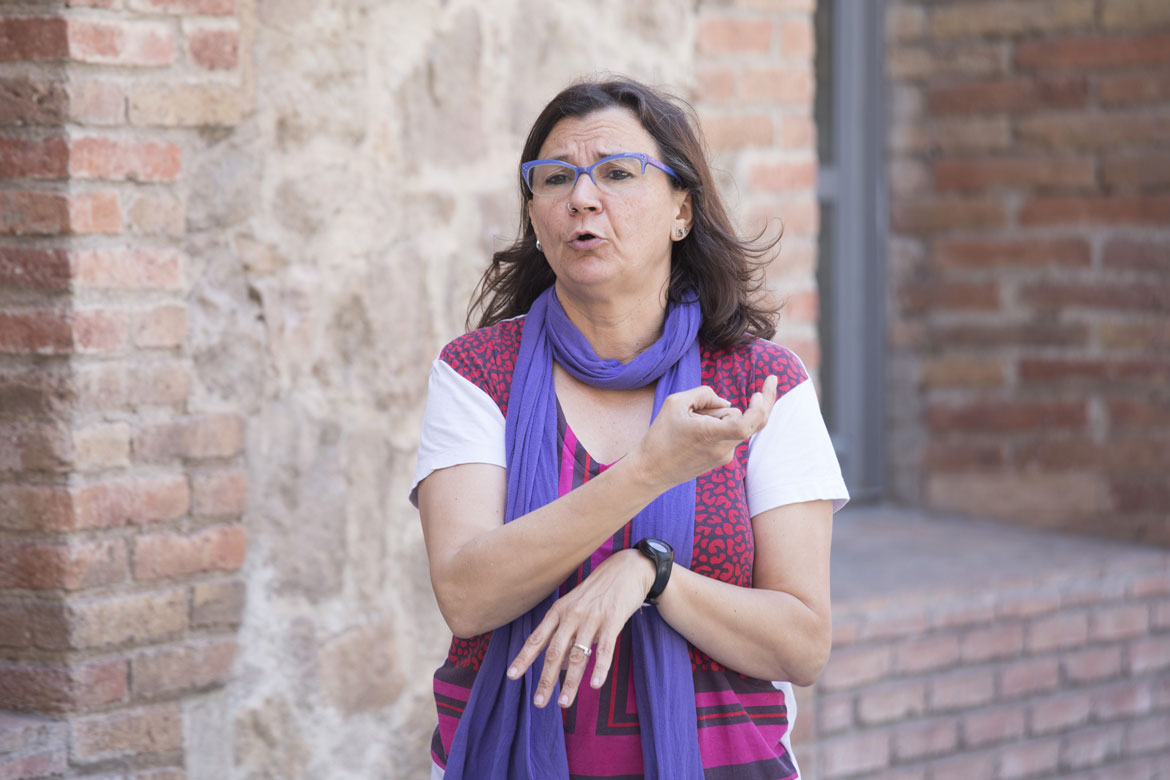 To tackle this problem, UPF, through GLIF and with the coordination of Quer, leads the project ‘SIGN-HUB: preserving, researching and fostering the linguistic, historical and cultural heritage of European Deaf signing communities with an integrated resource’. SIGN-HUB is an ambitious research project within the framework of the European Commission’s Horizon 2020 programme.

Its main objective is ‘to provide the first comprehensive response to the societal and scientific challenges resulting from widespread neglect of the cultural and linguistic identity of signing Deaf communities in Europe’, he explained.

It is vital to change the perception of sign languages to understand them ‘not as a communicative crutch for the sensory impaired’, said Quer, but rather ‘a gift of the diversity of human cognition that manifests as another piece of the linguistic and cultural wealth of society as a whole’.

‘LSC is not a communicative crutch for the sensory impaired, but a gift of the diversity of human cognition’

It will also include the first digital archive of the life stories of members of the oldest generations of the Deaf communities in the participating countries, with the aim of documenting their historical memory as a minority.

In short, according to Quer, ‘It is a key project to recover, show and promote a largely unknown part of our common heritage and to encourage the participation of Deaf people in the various spheres of public life in equal conditions with hearing people.’

The members of the international consortium behind the SIGN-HUB project are:

We spoke with Berta Moya. She graduated from UPF’s Translation and Interpreting programme last academic year, with a specialization in Catalan sign language. This academic year she is enrolled on the master’s degree programme in Discourse Studies: Communication, Society and Learning.

‘As you know, languages take hours of dedication, motivation, interest and practice, a lot of practice’ 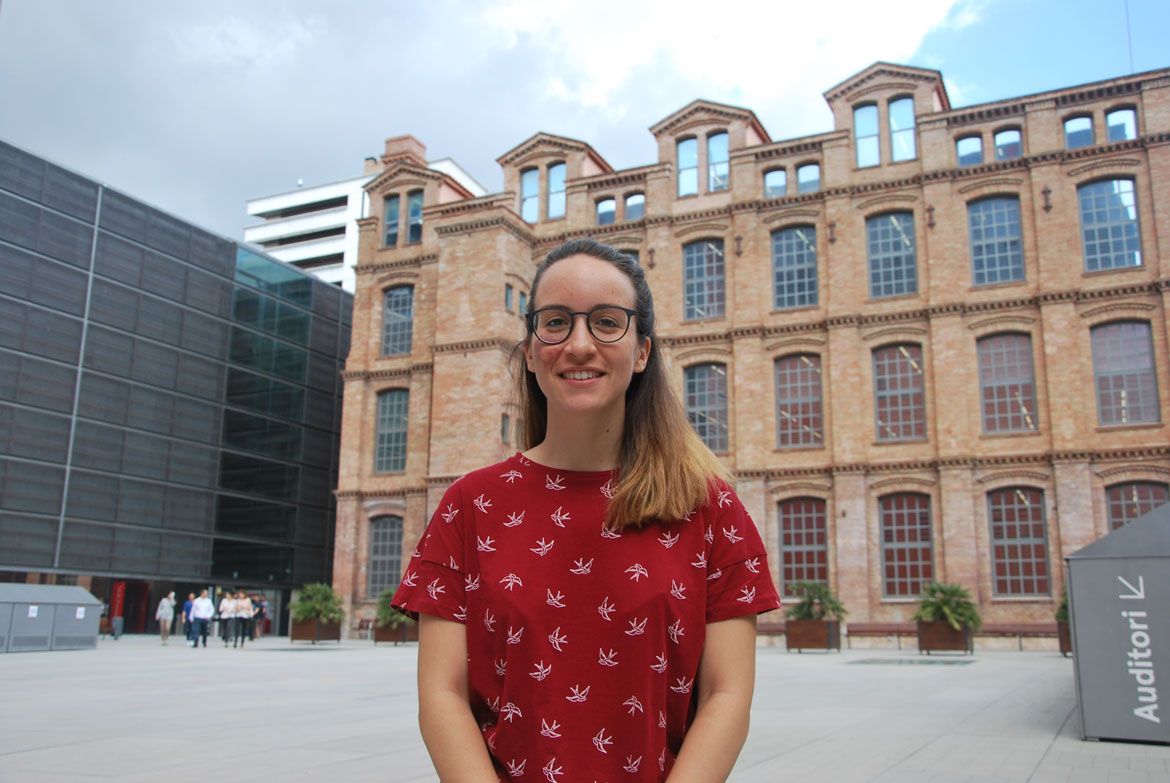 What made you choose LSC as a language for your degree programme?

From the time I was very young, sign languages always really caught my attention. I was always mesmerized by the interpreters on television. One day, I told an acquaintance that I was considering studying Catalan sign language, and it turned out she had a very good friend studying LSC interpreting at UPF. I got in touch with her, I had the chance to speak to her, and she told me about her experience. That’s when I decided to enrol on this programme.

Did you have any prior knowledge of LSC?

Honestly, I only knew the dactylological alphabet, a few polite expressions, and how to count to twenty. Everything I knew before I enrolled was self-taught. It is a complex language and, since each modality is different from oral languages, it can be very complicated. As you know, languages take hours of dedication, motivation, interest and practice, a lot of practice.’

What skills should a good LSC interpreter have?

I think you need to have quite a few. If I had to choose the most important ones, I would say that they are: a very good mastery of both LSC and Catalan and Spanish, a good memory and good visual discrimination, high concentration, the ability to divide your attention, stress management skills, the ability to reformulate, descriptive abilities, good posture and body language, amongst others. It’s a long list.

Now that you have finished, what’s your opinion of the programme?

Very positive! I learned a lot, I had many highly enriching experiences, and, above all, I am leaving knowing that I received a good education. Of course, you’re never done learning. It’s been four very intense years, but there’s still a ways to go and room for improvement.

What are your challenges for the future?

This year, I am studying the master’s degree programme in Discourse Studies, here at UPF. Thanks to this programme, I will be able to enrol on a PhD. Research in LSC is a field I am very interested in.