Eva, the Etic Virtual Assistant, already welcomes you to the Tànger building on the Poblenou campus - Research at UPF

Eva, the Etic Virtual Assistant, already welcomes you to the Tànger building on the Poblenou campus

Eva, the Etic Virtual Assistant, already welcomes you to the Tànger building on the Poblenou campus

The project, now in a Beta version, arises from a multidisciplinary team made up of researchers from various research groups, and administration and services staff of the Department of Information and Communication Technologies. It is currently able to locate people, spaces, or activities that are being carried out if asked questions in English. 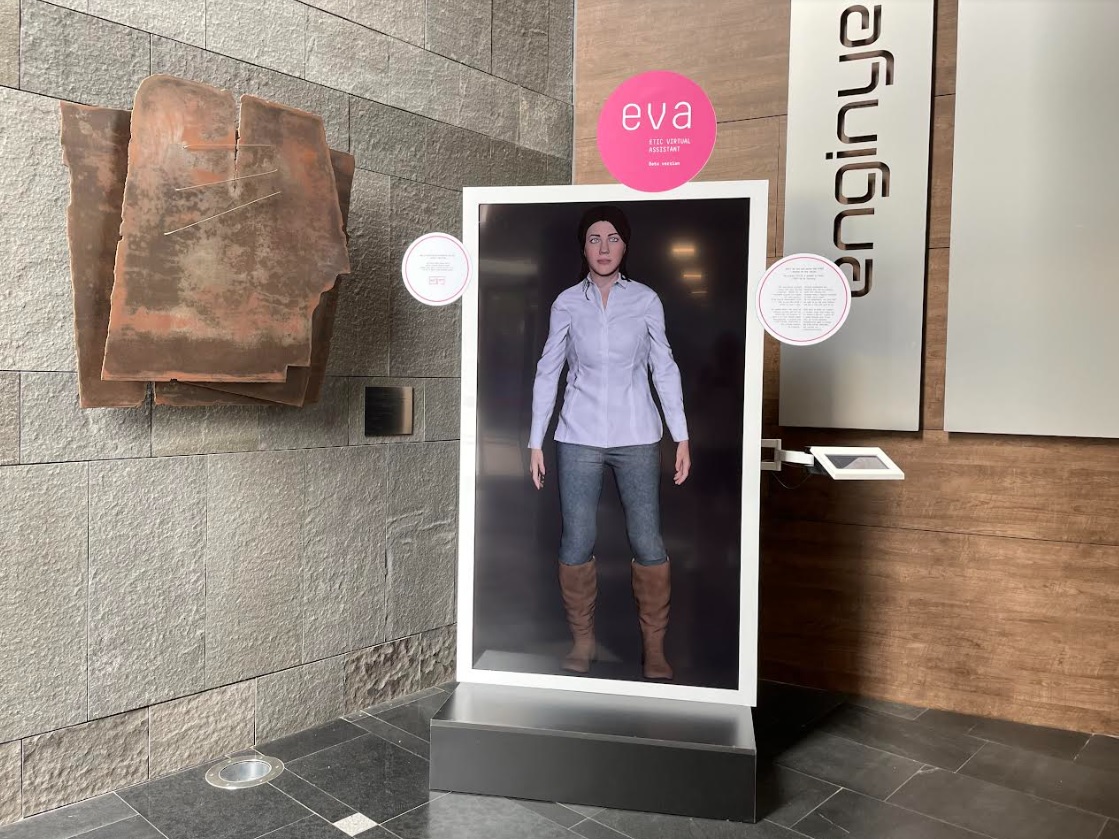 EVA, the Etic Virtual Assistant, has just been put into service in the Tànger building on the Poblenou campus. It is a virtual assistant, sited at the entrance to the building, which is able to answer simple questions in English such as, for example, where a researcher’s office is or where a specific research group of the UPF Department of Information and Communication Technologies (DTIC) is located.

The initiative, now in its beta phase and initially promoted by the administration and services staff of the DTIC enjoys the participation of a multidisciplinary team of researchers. The proposal was integrated as a use case in the European research project PRESENT in which companies and research institutions, including the UPF Interactive Technologies Research Group (GTI), are working to create virtual digital humans that look totally natural, demonstrate emotional sensitivity and can establish an attractive dialogue.

The installation of this type of assistant, which can be very useful in very diverse locations and sectors, is also designed for the experimentation and evaluation of technology.

Its development has also involved the Natural Language Processing Research Group (TALN), which is undertaking language synthesis, that is, getting the virtual assistant to recognize the user’s voice message and give an answer that fits the requested information.

EVA currently works with a closed system of pre-recorded responses, but the researchers’ goal is for it to “evolve so that it can intelligently give information with an automatic speech synthesis system”, explains Eva Valls, a researcher at the GTI who is developing the interaction and 3D graphics part. Another of the upcoming evolutions, Valls assures, “is that EVA will be able to respond in several languages, including Catalan and even in sign language. We are participating in the European research project SignON with the aim of being able to capture images of the user through a camera and for the assistant to be able to recognize and respond to them, also in sign language”.

The installation of this type of assistant, which can be of great use in a wide variety of locations and sectors, is also designed for technology experimentation and evaluation. As Eva Valls explains, “it can give us a lot of information to understand how an elderly person or a child, for example, interact and relate to these types of interfaces”. Finally, she adds, “in this case it is a woman because she was the model we were working with at the initial moment, but various assistants can be generated, simulating different genders and ages”.