Ferran Nadal-Bufí is a PhD student with the Proteomics and Protein Chemistry Unit of UPF directed by David Andreu. On 2 May, he won first prize in the Rin4’ competition as well as the special prize awarded by the public. 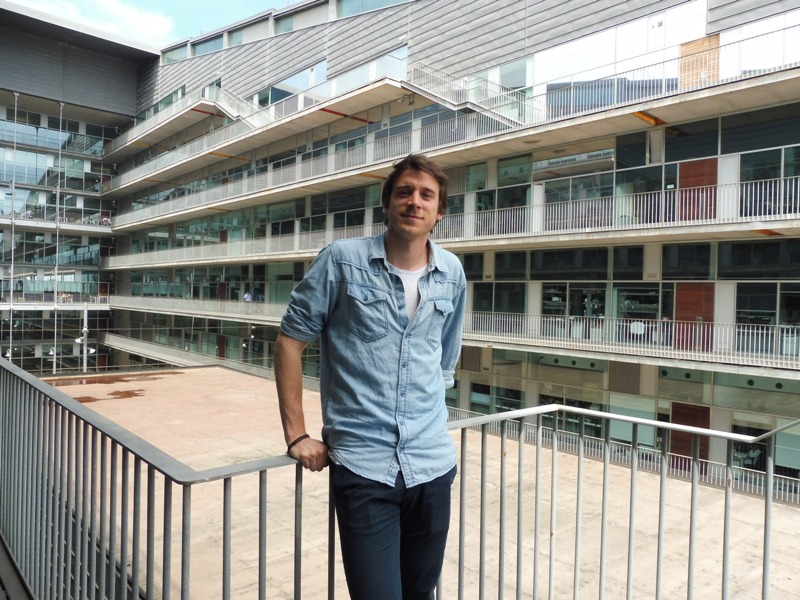 Ferran Nadal-Bufí is a PhD student with the Proteomics and Protein Chemistry Unit of the Department of Experimental and Health Sciences (DCEXS) directed by David Andreu. On 2 May, he won first prize in the Rin4’ competition as well as the special prize awarded by the public. In his presentation “All that blood can tell”, he showed great skill at making such a complex subject as blood composition an attractive visual issue.

- What encouraged you go in for the Rin4’ competition?

A few months ago I presented the results of my research to my colleagues at the laboratory. My boss told me, constructively, that the presentation was too technical and little didactic. And that’s with all of us being not only scientists, but scientists working in the same field! Shortly after I heard about the Rin4’ competition and I thought it would be good training to learn to be didactic and to speak to a general audience.

- What method did you adopt to prepare your presentation?

To make an impact, I knew I wanted to make it visually spectacular, beyond talking and explaining slides. Aside from that, I have a routine when I present: I always memorize the first three sentences of the presentations. Once I’ve said them, I feel at ease and I can improvise, though following a small script.

Research can be exasperating

- What did winning the competition mean to you?

The idea of ​​winning Rin4 ‘was a joy and a great satisfaction for me. It’s a huge  contrast with the daily work in the lab. Sometimes we work for weeks on an experiment and the result is negative, or even worse, it’s neither negative nor positive and no conclusions can be drawn! Research can be exasperating. There is some degree of frustration that can lead to demotivation and the truth is that getting Rin4’ recognition has given me a boost.

- Could you briefly explain your research?

I work in David Andreu’s group, dedicated to researching proteomics, the study of large groups of proteins. Specifically, we focus on blood proteins. Our goal is to obtain a fast, easy and affordable method to allow us to identify as many blood proteins as possible.

- Why is it so difficult to detect all the proteins in blood?

Blood has some very abundant proteins and others that are very scarce. Unfortunately, the scarce ones are often the ones that are linked to diseases, but their concentration prevents detecting them until they accumulate as the disease progresses. Our research seeks methods to remove highly abundant proteins to be able to analyse the others. As I said at Rin4’, blood is like a huge swimming pool full of table-tennis balls, which are all white and there is one red one. We have to try to find the red one. Obviously, if put our hand in to take out the red one, in all likelihood we’ll pull out a white one. Our idea is to remove the white balls to manage to get as many balls of other colours as possible.

Blood is like a huge swimming pool full of table-tennis balls, which are all white and there is one red one. We have to try to find the red one.

- How much blood is needed to analyse all the proteins?

With a finger prick we obtain about 250 microlitres of plasma and some methods only require 14 to analyse proteins. We dilute the blood in organic solvents. Proteins do not feel comfortable in an organic environment and collide with each other until they precipitate. The first to precipitate are the bigger proteins and we know that there is a correlation (with some exceptions) that the larger the proteins in the blood, the more abundant they are. By adding just the right amount of solvent to make only the large proteins precipitate, we can see many small proteins that were previously hidden.

- What possible applications could this method of identification have?

Identifying large groups of proteins can replace what is used today in immunology, namely identification kits that use antibodies. To detect many diseases at the same time we would need to have many specific antibodies. It is very difficult to distinguish one proteoform from another, and often detecting a disease depends on this differentiation. With a view to the future, we must extend the use of the mass spectrometer, as this device can determine all the molecules present in a liquid such as blood.

There are an estimated 100,000 different proteins in the body and they are all represented in blood to some extent

- How many proteins have you managed to detect?

About 400. It’s actually a very small number: there are an estimated 100,000 different proteins in the body and they are all represented in blood to some extent.

- What are your plans for the future?

My near future is uncertain. In the long term, I’d like to do academic research at the university. But for now, the PhD I’m doing does not have funding. I have applied for several scholarships, but I haven’t received a positive response from any of them.

- After this experience, are you still thinking of devoting yourself to research?

I know different options are coming up. In fact I now have the option of doing a PhD at the University of Queensland in Australia. I would prefer to stay in Barcelona and finish the thesis I started, but I am glad to have the option of going abroad if there is no other.

- What would you say to someone who is beginning their thesis?

Despite my situation, I like to be positive. Thanks to these months of research, I can now get access to another doctorate that will allow me to continue my career as a researcher at an internationally prestigious  centre of excellence. Jumping in at the deep end ends up bringing results. It’s possible to dedicate yourself to research even without having a brilliant academic record. Good grades help, but in science there are many examples of good researchers who were not brilliant students.

- What grades did you use to get when you were younger?

I’ve always been a good student. At high school I managed to score more than 12.5. I could choose to do any degree course except medicine at the University of Murcia. I will always have that thorn in the side that I can’t say I could have done any degree in the country. If I had wanted to do medicine in Murcia, I wouldn’t have been able to!

- Was it clear to you that you wanted to study Human Biology?

Yes. In third year of secondary school, in Natural Sciences, I did genetics and they explained Mendel’s peas to me: I was fascinated. Then I became interested in DNA and biology in general, and in my fourth year I did some summer science stages. That motivated me a lot, I had the opportunity to do experiments with DNA, to see polymorphisms... things that seemed spectacular at the time. That was when I realized I would like to dedicate myself to research.

- Have you got any hobbies?

Yes. I play basketball semi-professionally and am really involved: I train three days a week for three hours. In addition, I coach three basketball teams in Granollers. For me, basketball is another priority. Throughout my sports career I have learned the importance of teamwork, commitment and effort, values ​​that are applicable and highly useful in my professional work as a researcher.