Yesterday saw the final of the Rin4’ competition, in which doctoral students explained their research in four minutes in front of a lay audience. The winner of the first prize and the special prize awarded by the public is to represent UPF in the “Read your thesis in four minutes” competition 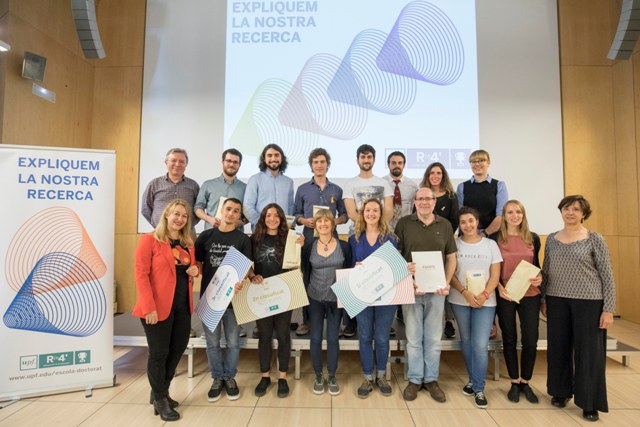 Expaining the research for a doctoral degree in four minutes using simplified language is the challenge posed by the Rin4’ competition (Research in 4 minutes), whose fourth edition ended yesterday with the final held on the Ciutadella campus.

Twelve finalists out of the 31 participants who took part in the knock-out stages, presented their research at the competition organized by the UPF Doctoral School which seeks to promote the importance of communication skills in the dissemination of science.

Alicia Sánchez, a doctoral student with the Multicell Genome Lab of the Institute of Evolutionary Biology (IBE) supervised by Iñaki Ruiz-Trillo, was chosen as the winner of the first prize of €900, and the special prize awarded by the audience, of €200.

“It is important to prepare the presentation well, to be clear about what message you want to convey and to structure it. I really enjoyed seeing how the public reacts, it has been a very good experience. Our boss is a very active communicator of science, we participate in many activities and want to divulge our research to the general public”, said the winner.

In her presentation “In search of the lost species. Biodiversity and DNA”, she explained that between 60 and 70% of our planet’s biodiversity is still undiscovered and the majority of these unknown organisms are extremely small: they are only made up of one cell. Her research seeks to discover part of this diversity. To achieve this she is using a technique called metabarcoding in which a DNA sequence works like a bar code identifying each species.

As a novelty this year, the winner will also represent UPF at the “Read your thesis in 4 minutes” competition, organized by the Catalan Foundation for Research and Innovation (FCRI), with the support of the Catalan Government, at which the twelve Catalan universities will compete.

The second prize, of €600, went to Konstantina Mitsi, also studying her doctorate with the Multicell Genome Lab. In her research, Mitsi seeks the common ancestor to single- and multicell organisms. As she explained in her presentation “How did animals come into being?”, “this ancestor did not leave a fossil record, I am trying to reconstruct it from the information found in the DNA of today’s organisms”.

Jesús Antonio Bas, from the PhD in Biomedicine, won the third prize, of €300, with his presentation “Does the one with most resources lead? How babies understand leadership”. His work investigates the behaviour of babies by analysing their reactions to seeing videos that represent different situations on leadership and the distribution of resources. He is currently investigating with the Speech Perception and Acquisition research group at the Research Center for Brain and Cognition at UPF.

The jury, comprising Emma Rodero, a lecturer with the University’s Department of Communication, Fatima Gebauer, researcher at the Centre for Genomic Regulation (CRG), and Enric Vallduví, vice-rector for Research and Doctoral Studies, valued, among other aspects, the academic significance of the presentations, the clarity of their presentation, and the ability and skill at conveying and captivating the audience in general. The winner of the 2016 edition, Carlos Toscano, undertook the prizegiving.

Finally, the director of the Doctoral School, Núria Sebastián, congratulated all of the finalists and said that the presentations are improving year after year. She stressed that this initiative is a very good opportunity to learn about the research that is carried out in other departments. Antonio Monegal, a lecturer with the Department of Humanities, took part in the event as presenter of the final.