Pompeu Fabra University, CY Cergy Paris University, Vrije Universiteit Brussel, University of Gothenburg, University of Warwick and Univerza v Ljubljani have signed an agreement that provides for mobility to begin in the 2022-2023 academic year, and stipulates that up to 100 undergraduate students from each university have experience at other alliance universities each year. During the event, which took place on November 23 on the Ciutadella campus, the official accession of the University of Babeș-Bolyai in Cluj-Napoca (Romania), the tenth of the EUTOPIA alliance, was signed. 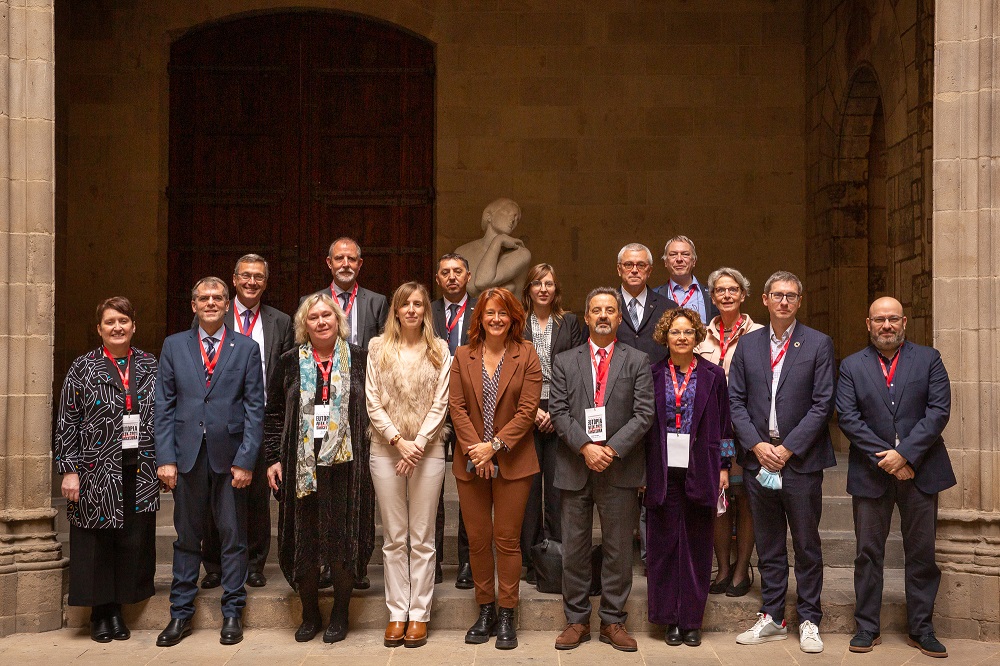 This week has seen an important step towards the integration of the member universities of the EUTOPIA alliance, one of the pilot projects of the European Universities Initiative driven by the European Commission. During EUTOPIA Week, held in person in Barcelona from 22 to 26 November, a mobility agreement was signed between the alliance’s six founding universities: Pompeu Fabra University, CY Cergy Paris University, Vrije Universiteit Brussel, University of Gothenburg, University of Warwick and Univerza v Ljubljani.

Nikki Muckle: “We hope that the signing of the agreement will fill the gap we have identified between what is currently possible in the Erasmus+ mobility programmes and the European Universities Initiative"

This agreement, in the words of Nikki Muckle, general secretary of EUTOPIA, “should serve to break the mould of traditional student exchanges, both in number and in form, as we move from agreements between faculties to agreements between universities as a whole”. The signing of the agreement, she added, “we hope will fill the gap we have identified between what is currently possible in the Erasmus+ mobility programmes and the European Universities Initiative”.

According to Oriol Amat, rector of the UPF, "today we have signed a very important agreement that will promote and facilitate mobility for all members of the university community. We are on the way to becoming a truly European university". Oriol Amat stressed the importance for UPF of being part of this European alliance: "A university that wants to have a social impact must rely on several pillars and strategies, and internationalization is fundamental. Being part of EUTOPIA helps us in our internationalization strategy to be a university with the maximum possible impact and so that all the people who are part of UPF have the best possible services, especially in this area".

Oriol Amat: "Today we have signed a very important agreement that will promote and facilitate mobility for all members of the university community. We are on the way to becoming a truly European university"

The signed document, which has an initial duration of five years, provides for mobility to start as of the 2022-2023 academic year, and stipulates that up to 100 undergraduate students from each university should spend periods in other universities in the alliance every year. Moreover, the universities are committed to studying other forms of mobility, such as digital or short-term mobility, to open up the range of possibilities insofar as possible. Finally, the agreement provides that each university will allow up to 10 members of its teaching and research staff and administration and services staff to spend training periods or teaching internships at one of the signatory universities of the agreement. 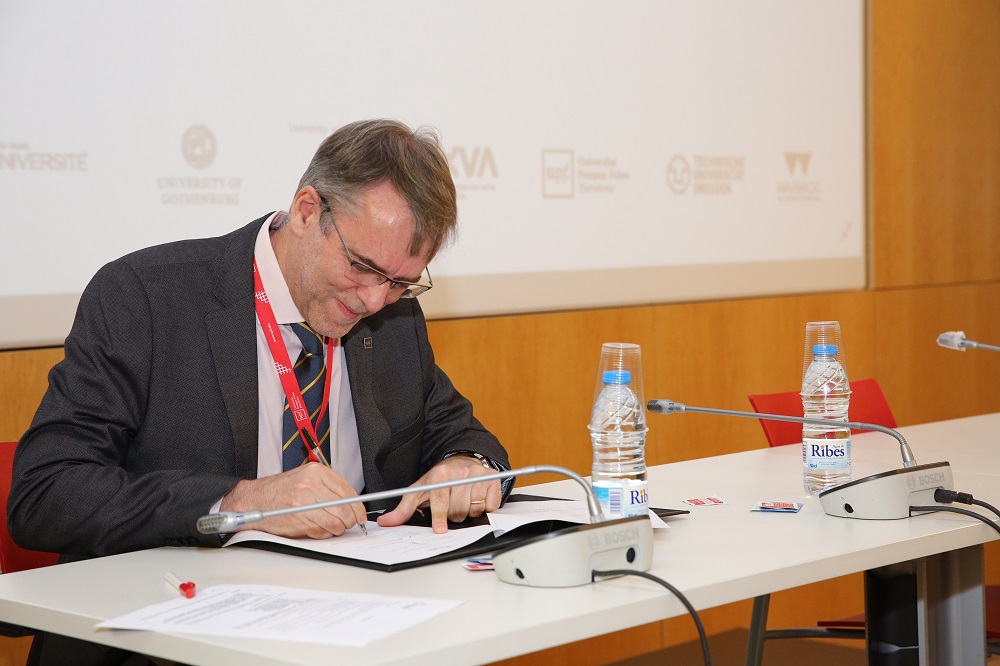 End of the extension of the EUTOPIA alliance

During the ceremony, which took place on November 23rd at the Ciutadella campus, the official membership of Babeș-Bolyai University (UBB) in Cluj-Napoca (Romania), was also signed the tenth of the EUTOPIA alliance. With its adhesion, and that of the Ca Foscari of Venice, Dresden University of Technology and NOVA University Lisbon last September, the expansion of members of the consortium has been completed.

Eva Wiberg: "It is significant for us to expand the alliance towards eastern Europe, thus integrating a much wider universe of Europe’s characteristic diversity and its cultures”

Eva Wiberg, vice-chancellor of the University of Gothenburg and EUTOPIA chair, welcomed the new university and said that “the UBB has agreed to join our consortium providing a unique multicultural experience, which includes top level education and research”. She also underscored that “it is significant for us to expand the alliance towards eastern Europe, thus integrating a much wider universe of Europe’s characteristic diversity and its cultures”. She finally stressed that “with the entry of Babeș-Bolyai University, our alliance has now been completed and all ten of our members complement each other perfectly”.

This meta-university will thus be present in 10 countries and will unite ten universities and their cities. Barcelona, Lisbon, Paris, Brussels, Gothenburg, Venice, Dresden, Ljubljana, Coventry and Cluj-Napoca. In all, more than 300,000 students, 45,000 professors and administrators, 1,000 research groups and tens of thousands of alumni, as well as hundreds of collaborating institutions and companies. Thus, the alliance strengthens its scale of exchanges, collaborations, mobility and shared projects.

EUTOPIA’s mission is to shape a unique and daring alliance of transformative i8nstitutions that are committed in the long term. Students, researchers and administrative staff are working together to build a new academic model, reflecting an open and united Europe that respects its citizens and the environment. 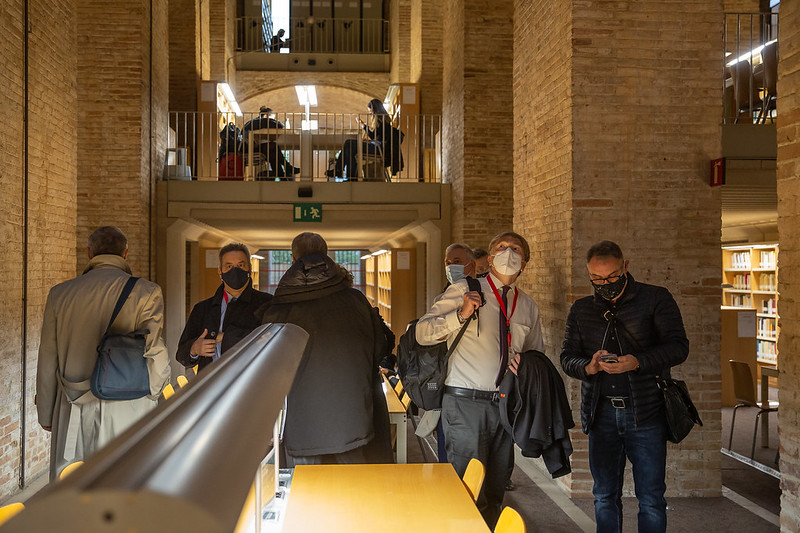 Beyond the Erasmus programme: the new European Universities

Europe is experiencing a new revolution its model of university education. The Erasmus programme, created in 1987, facilitated student mobility between EU countries and the Bologna process, in 1999, initiated the harmonization of European university systems. Now, the European Commission’s new EUI (European Universities Initiative) project seeks to go further and create a new concept of university in Europe: confederations of existing universities to boost total mobility among members of their communities.

EUTOPIA is one of the 41 alliances of universities in Europe that are currently piloting the most important educational experiment after the creation of the ERASMUS project which, as is well known, has allowed millions of European students to enjoy a few months’ mobility at European universities. It brings together ten universities and their campuses to open their degrees, their research and their transfer and innovation activities to all their students, professors, administration staff and collaborating entities.

In the words of Pelegrí Viader, UPF commissioner for the EUTOPIA project, “these universities must allow Europe to recover a predominant position in the world in terms of higher education, on equal terms with the big universities in the US or Asia-Pacific which today attract the large majority of international students who wish to study in the best universities in the world”. And he adds a relevant differential element: “It is worth mentioning that almost all European Universities will be publicly owned and will be able to compete in quality with the best in the world with European public prices”. 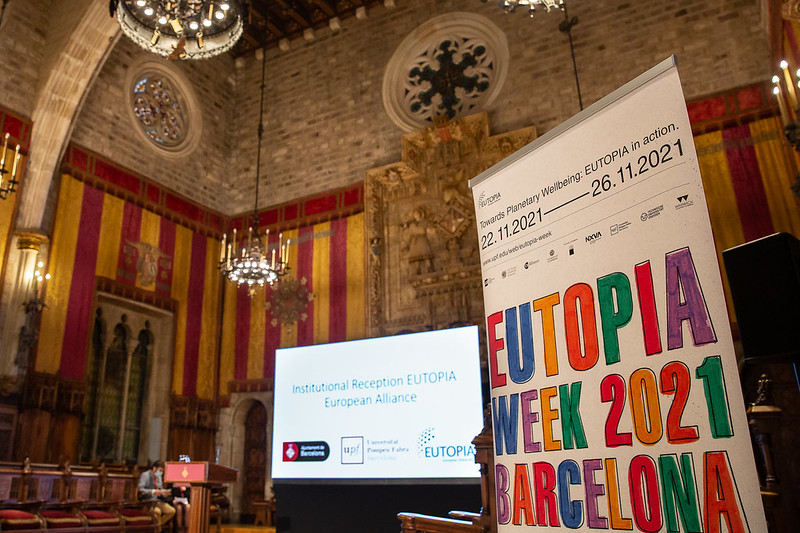