The programme, which is set to get under way in the 2019-2020 academic year, will span four years, the first two in London and the other two in Barcelona. This double bachelor’s degree is a first for Spain and will allow integrating two of the world’s main legal systems, English common law and continental law, specifically Spanish law. 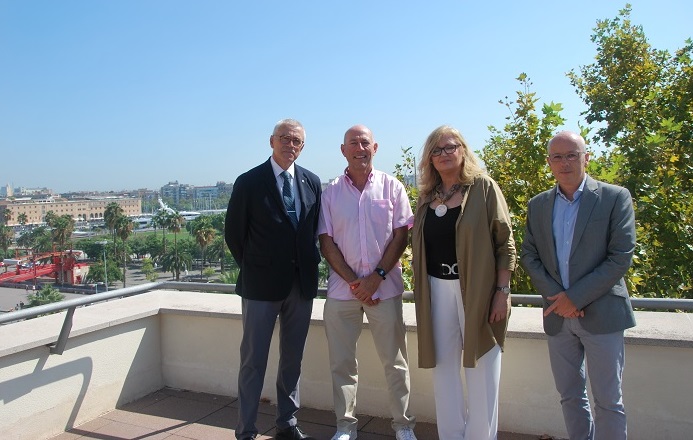 UPF is taking a big step forward in its internationalization with the creation of a double bachelor’s degree in Law together with King’s College London (KCL), a highly prestigious institution and leader in the main world rankings.

The double bachelor’s degree in Law between King’s College London and UPF, which will be launched in the 2019-2020 academic year, is an academic training programme that will allow students to obtain two most valuable qualifications, the English bachelor of Laws (LLB) and the Spanish bachelor’s degree in Law, in just four years. The first two years will be taken in London, where access and admissions will be managed, and the second two in Barcelona.

Today, 20 September, the Rectoral building of Pompeu Fabra University hosted an institutional presentation of this joint programme which involved the rector, Jaume Casals, José Luís Martí, vice-rector for innovation projects, and various lecturers and officers of the two centres that have been working hard to make it possible.

The first two years will be taken in London, where access and admissions will be managed, and the second two in Barcelona.

Participating on behalf of KCL was Robert Wintemute, professor of Human Rights at the Faculty of Law at KCL who is responsible for the programme in London; and for UPF, Josep Capdeferro, professor of History of Law and coordinator of the programme in Barcelona; Anna Maria Caballé, dean of the Faculty of Law; Maurici Pérez, professor of Roman Law and vice-rector for double bachelor’s degrees, and Sara López, head of the International Relations Service. Professors Josep Ferrer and Carlos Gómez, who have played a decisive role in the success of the programme, were unable to attend.

In his welcome speech, Jaume Casals thanked everyone who has made this double bachelor’s degree possible, and mentioned the procedures and regulations that they have had to overcome in order to move forward with such a challenge. “This laborious, sometimes shady task performed by a great many people is not often acknowledged, and so now is a good time to do so”.

Then, Josep Capdeferro noted the uniqueness of the double bachelor’s degree: “This programme is unique in Spain. We at UPF, a public institution of excellence in the Catalan university system, are proud to be promoting it. Is the icing on the cake of our Law studies, leaders in internationalization”. And he added: “We will educate citizens without borders, eager to learn of both Anglo-Saxon law and continental law, capable of managing transnational challenges of great legal complexity”.

Robert Wintemute stated in his speech that this joint programme will be a great opportunity for the students of the United Kingdom to be able to familiarize themselves with a different legal environment from that of their country of origin. “King’s College has a long track record in this type of programmes together with universities of the first order such as Paris II Pantheón-Assas, Berlin Homboldt or the Chinese University of Hong-Kong. Now we needed a partner in Spain, and UPF was the perfect candidate”.

According to dean Anna Maria Caballé, “we hope that the programme will lead to synergies between the two institutions, to encourage the mobility of lecturers in both directions and future collaborations in various projects, also in other scientific areas. Both universities are benchmarks in their countries, and this cooperation will be beneficial to them and their respective societies”.

The Attic Room of the Rectoral building hosted the institutional presentation of the joint programme. Maurici Pérez, coordinator of double bachelor’s degrees at the Faculty of Law, highlighted the integration of the two legal systems in the double bachelor’s degree and how graduates might benefit: “The joint programme will act as a bridge between two of the main existing legal systems: common law, used for England, Wales, former British colonies, and in most U.S. States, based on the legal development carried out by the English courts, and continental law, based on Roman law, which governs most countries in Europe, Latin America, and many Asian countries”.

According to Maurici Pérez, this integrative approach will provide a great many benefits to society. Moreover, it will open many doors of the labour market for graduates, who will acquire an international and global profile much sought after by major corporations, as they will be able to practise with a knowledge of these two major legal systems. “They will have the possibility to work with international consultants, advisors and solicitors, carrying out all kinds of transnational and global operations”.

It stands out in respect of other double bachelor’s degrees taught at UPF in that it is not just one university that issues two qualifications, but two universities, each issuing its own. Thus, the two centres collaborate closely to link and partially recognize their respective bachelor’s degrees, leading the students to acquire an integrated and innovative curriculum.

The two qualifications are obtained at the end of the fourth year of the programme, when the student has fulfilled the academic requirements of the two universities.

The two qualifications are obtained at the end of the fourth year of the programme, when the student has fulfilled the academic requirements of the two universities. Technically, 180 ECTS credits are required in London and 240 in Barcelona, summing, in both cases, the ECTS passed and recognized.

The foreseen number of places is around fifteen per cohort, with some sixty students when the four years of the programme are fully deployed. As for the teaching language, in London it will basically be English, and in Barcelona, ​​Spanish, although students will be able to voluntarily take subjects in Catalan and some in English.

The access filters applied at the start of the programme are those of KCL. Therefore, access is managed on the basis of the dossiers that candidates from around the world send to the central university admissions office in the United Kingdom (UCAS).

A mixed KCL-UPF committee will examine the resume of the candidates and decide which ones deserve admission. When the students are doing their second year, they will apply to access UPF by means of the hundred credits completed at another higher education institution. In the third year, now in Barcelona, students will include the 120 credits completed at KCL in their academic records, in accordance with the carefully drafted tables of equivalences.

With regard to the programme calendar, the first cohort will begin to study at KCL during the 2019-2020 academic year and at UPF in the 2021-2022 academic year. The first candidates for access via the UK’s UCAS system are expected to start applying in the autumn term of the 2018-2019 academic year. The deadline for applications is 15 January 2019.