The peptide that links diabetes and Alzheimer’s diesease

The peptide that links diabetes and Alzheimer’s diesease

UPF researchers have found that monomeric amyloid b -peptide mimics insulin contributing to sugar entering neurons, but with age its behaviour is the opposite. The findings were published in the journal Brain Communications. 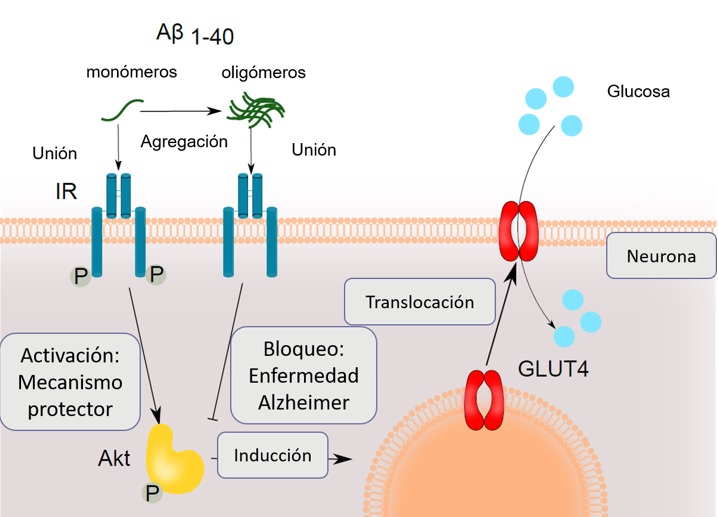 Since childhood our body releases monomeric amyloid β-peptide from all the cells of the body, although it is in the brain that the greatest quantity is generated. Although we know where and how this small protein is produced, we still do not know its function. For much of our life, the peptide aids the entry of sugar to within the neurons at least, that is, it fulfils the same role as insulin. But over the years, this changes and its function becomes the opposite.

In a study carried out in silico, then tested in vitro and modelled by means of systems biology, researchers from the Laboratory of Molecular Physiology, the Structural BioInformatics group and the Dynamical Systems Biology Laboratory at UPF have found that β-amyloid behaves differently with age. As we get older, there starts to be a large amount of β-amyloid in the brain, where it aggregates to form oligomers that block the insulin receptor and prevent the neuron from capturing glucose.

In particular, neurons cannot allow all glucose input to depend on insulin, as the rest of the body does. The entry of glucose into the brain is independent of the presence or absence of insulin, except in certain areas that may have high energy requirements such as memory formation areas. Thus, only at the moments in which a high energy expenditure occurs is insulin used and only there does it behave as in the rest of the body. This is where the b-amyloid peptide would fulfil a physiological function. The structure of the peptide is very similar to that of insulin, both in size and in sequence. Hence it has such an affinity for the insulin receptors found in the cell membrane.

“There is a clear relationship between the sites where more ß-amyloid is produced and the sites where there is this insulin-glucose receptor relationship, such as the hippocampus”, explains professor Francisco Muñoz, head of the laboratory and co-author of the study published in the journal Brain Communications. “The fact that there is so much peptide is not a problem, but the aggregation of monomeric ß-amyloid forming oligomers in beta sheets is a problem, as this represents a conformational change in the structure of proteins that, in adults, always represents the onset of a serious degenerative disease”.

In fact, aggregation in beta sheets and the consequent formation of oligomers is the common cause of various neurodegenerative diseases. For example, Alzheimer’s is produced by beta sheet aggregation of the amyloid, Parkinson’s by beta synuclein aggregation, and amyotrophic lateral sclerosis (ALS) by TDP43 protein aggregation.

The study helps to explain how amyloid oligomers can cause Alzheimer’s disease, producing a state of insulin resistance in the brain, a previously described pathological state. “In the early stages of Alzheimer’s we see a reduction in the metabolic activity of neurons and glucose uptake”, Muñoz continues, “and this fits perfectly with the fact that these oligomers do not kill neurons immediately, because neuronal death occurs when severe symptoms are observed (or vice versa), such as major memory losses and lack of spatial awareness. But until then, what has occurred is only synaptic damage, small lesions that do not kill the neurons but do cause problems”.

Muñoz’s team believes that animal studies could be conducted to endorse these results. “It would also be highly valuable to study whether medicine such as metformin, which is already used successfully for the treatment of type 2 diabetes, can serve in the treatment of Alzheimer’s”, the researcher concludes.

The research was carried out with funds from the Spanish Ministry of Science and Innovation, the State Research Agency, the European Regional Development Fund (ERDF), the QUAES-UPF Chair, ERANET ERA-CVD and the Carlos III Institute of Health.