Researchers from Pompeu Fabra University and the University of Leicester have discovered at the site of Çatalhöyük (Anatolia, Turkey) a wide variety of hitherto unknown wild resources. The study, published in the journal PLOS ONE, has used an innovative approach, based on the analysis of microscopic plant remains extracted from grinding implements from different domestic contexts. 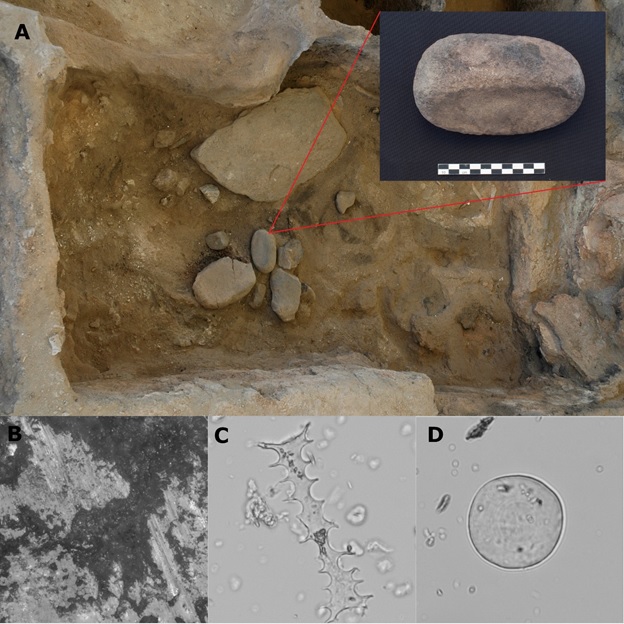 A study conducted by researchers from the UPF Culture and Socio-Ecological Dynamics research group (CaSEs) and the University of Leicester (UK) has provided a highly dynamic image surrounding the use and importance of hitherto unknown wild plant resources at the Neolithic site of Çatalhöyük (Anatolia, Turkey). The researchers carried out their work combining the analysis of microbotanical remains and use-wear traces in various stone implements recovered from the site, which in the past hosted one of mankind’s first agricultural societies.

Çatalhöyük is a world heritage archaeological site located in Anatolia (Turkey), which was inhabited during the Neolithic, between 7,100 and 6,000 BC. This site has received worldwide attention due to its size and because it is one of the first urban centres with a high density of agglomerated dwellings, to which entry was gained through the roof and which contained elaborate wall paintings inside. The settlement was studied continuously for nearly three decades and provided a wealth of archaeobotanical remains (charred remains of plants) and a wide range of stone artefacts and tools used to process plant resources.

Despite the extensive research conducted in the area, much of what is known about agricultural practices and the use of plant resources, both at Çatalhöyük and in many other archaeological settlements, is based on the study of charred remains. However, these remains occur causally, either when cooking food or due to accidental fire, which gives a limited image of the use of plant resources in the past.

“We recovered residues trapped in the pits and crevices of these stone artefacts that date back to the time of being used, and then carried out studies of microbotanical remains and thus reveal what types of plants had been processed with these artefacts in the past”

The study, led by Carlos G. Santiago-Marrero, a predoctoral researcher with the Culture and Socio-Ecological Dynamics (CaSEs) research group of the UPF Department of Humanities, together with Carla Lancelotti and Marco Madella, ICREA-UPF research professors and members of CaSEs, and Christina Tsoraki, of the School of Archaeology and Ancient History at the University of Leicester (UK), used an innovative approach based on the analysis of microscopic remains taken from grinding implements from three domestic contexts, attributed to the Middle (6,700-6,500 BC) and Late (6,500 -6,300 BC) periods of occupation.

“We recovered residues trapped in the pits and crevices of these stone artefacts that date back to the time of being used, and then carried out studies of microbotanical remains and thus reveal what types of plants had been processed with these artefacts in the past”, the researchers explain.

Among the microscopic remains studied by the researchers are phytoliths, from the deposition of opal silica in plant cells and cell walls, that provide clues about the presence of anatomical parts, such as the stems and husks of plants, including wheat and barley. Another residue studied are starches, glucose compounds, created by plants to store energy, which are found in large quantities in many edible parts of plants, such as seeds and tubers.

Thanks to combining these two lines, the researchers have shown that although the community of Çatalhöyük was based on an agricultural economy by definition, growing cereals and vegetables (wheat, oats, peas), there continued to be much exploitation of wild resources outside the spectrum of domestic resources, which had not yet been found at this site.

Use of wild plant resources to diversify the diet, through complex processing

“Microbotanical evidence has contributed to our knowledge about the plants used in the past and helped identify the presence of wild plants and various aspects related to possible strategies to exploit these resources, both to diversify the diet and to replace any calorie deficit that may have arisen in times of scarcity”, the researchers assert. These wild plant resources were as important as domestic ones, and were most likely used regularly to supplement the core diet.

These wild plant resources were as important as domestic ones, and were most likely used regularly to supplement the core diet.

“Among our findings we have shown that the community used a wide range of tuberous plants, many of them belonging to potentially toxic taxonomic families, which require complex processing or use. This shows the great phytocultural knowledge possessed by this community”, the authors underscore. And they add: “Many of these tuberous plants had highly restrictive seasonal life cycles, which has helped us to infer the possible means of organizing and exploiting the plant environment at different times of the year”.

Moreover, another important aspect revealed by the study is the processing of wild millet seeds, which had never been found among the charred remains of plants on the site.

The analysis of use-wear traces on the surfaces of plant processing implements, produced by use in various activities, has allowed the researchers to infer different tasks for which the tools were used.

Thanks to these analyses, they have discovered very diverse life histories of these implements and the close relationship with various aspects related to the processing of plant resources and other domestic activities. “By combining microbotanical evidence with use traces, we have discovered processes such as grain husking, the milling of legumes, tubers and cereals, and even the use of these implements in other activities not related to plant processing”.