In fandom, no distinctions of gender, race, language or origin are made

In fandom, no distinctions of gender, race, language or origin are made

This is one of the conclusions of the study El fandom en la juventud española, led by Daniel Cassany, a researcher at the Department of Translation and Language Sciences, who enjoyed the support of the Queen Sofía Centre on Adolescence and Youth and was presented in Madrid, today, 27 November, at the Telefónica Foundation Space.

Today, 27 November, from 10 o’clock onwards, on the occasion of the conference “Youth and leisure. New challenges, new answers” being held at the Telefónica Foundation Space in Madrid, Daniel Cassany, a researcher at the Department of Translation and Language Sciences at UPF, is participating in a round table on the findings of the research El fandom en la juventud española (2019), which has been carried out in the framework of the Research Grants programme of the Queen Sofia Centre on Adolescence and Youth of the Foundation for Aid against Drug Addiction, Fad (2016) with the support of Telefónica and Banco Santander.

The project aimed to explore, ethnographically, the presence of young Spaniards in the various ‘fandoms’ across the world, i.e., in the communities of enthusiasts and fans of video games, music groups, comics, TV series, fantastic literature, etc. “We wanted to find out if there are any young Spaniards in these worldwide communities, what activities they carry out, what products they produce, and what they learn from them and what interest they arouse. We also wanted to break with the prejudices that are often associated  with these practices, which are usually considered as being little uplifting or of no cultural or didactic interest”, explains Daniel Cassany, principal investigator of the project.

Virtual communities of fans as a paradigmatic example of youth leisure

Daniel Cassany, principal investigator of the study on virtual fan communities, highlighted that although fandom is not a majority phenomenon, the Spanish youth is present in the vast majority of communities of fans of various cultural products (video games, comics, music, fanfic, TV shows, films, etc.).

The phenomenon of fandom is a paradigmatic example of youth leisure today, as it maximizes the relational possibilities of technologies and applies them to individual and collective enjoyment

These young people mainly spend their free time channelling their passions. The report reveals that fans are organized in sophisticated communities, they work a great deal in teams, they are very consistent and devote time to maintaining the identity of the group: they teach beginners, produce content of their field, and share it with their colleagues. “The idea that fans are lazy youths who just want to have fun is totally false”, Cassany states. The young people who belong to the collective of fans are, therefore, a paradigmatic example of youth leisure today, as they maximize the relational possibilities of technologies and apply them to individual and collective enjoyment.

We wanted to break with the prejudices that are often associated with these practices, which are usually considered as being little uplifting or of no cultural or didactic interest 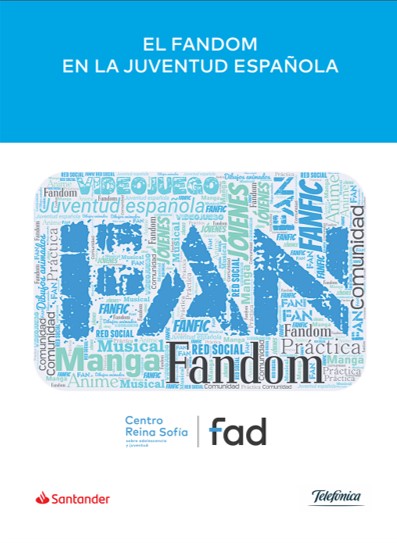 The fandom activities studied for this project were:

·         fanfic, or fanfiction: authors and readers of stories based on the plot, characters or ambiance of popular works such as Harry Potter, Twilight or The Hunger Games.

·         cartoons: followers of a wide variety of cartoons: The Simpsons, My Little Pony, anime, Masha and the Bear.

·         the scanlator: young fans of manga or Chinese and Korean comics, who scan, translate and offer amateur versions of their favourite comics.

·         groups of music fans, be it rather pop (One Direction, Justin Bieber) or other styles (hip-hop, trap, etc.), that establish communities of followers to promote groups, discs, doing translations, advertising gigs, etc.

“The result is an extraordinary diversity of practices, with highly technologically sophisticated, multilingual and intercultural products of remarkable quality”, Cassany explains. Young fans are passionate and work hard, free of charge and altruistically, to spread their culture, from a cooperative, collaborative perspective. “In fandom, no distinctions of gender, race, language or origin are made... if you like Star Wars or Dragon Ball... we can be friends”, Cassany adds.

The research behind “El fandom en la juventud Española”, which is already completed, consists of 270 pages and can be downloaded here, and there is also a website offering further information and testimonies by some of the young fans who have participated in the project.