In humans, consciousness rests on the brain’s ability to sustain rich dynamics of neural activity

In humans, consciousness rests on the brain’s ability to sustain rich dynamics of neural activity

Gustavo Deco, ICREA research professor and director of the Center for Brain and Cognition at the Department of Information and Communication Technologies, together with an international team of researchers, has participated in this study and is co-author of the article published on 6 February in the journal Science Advances. 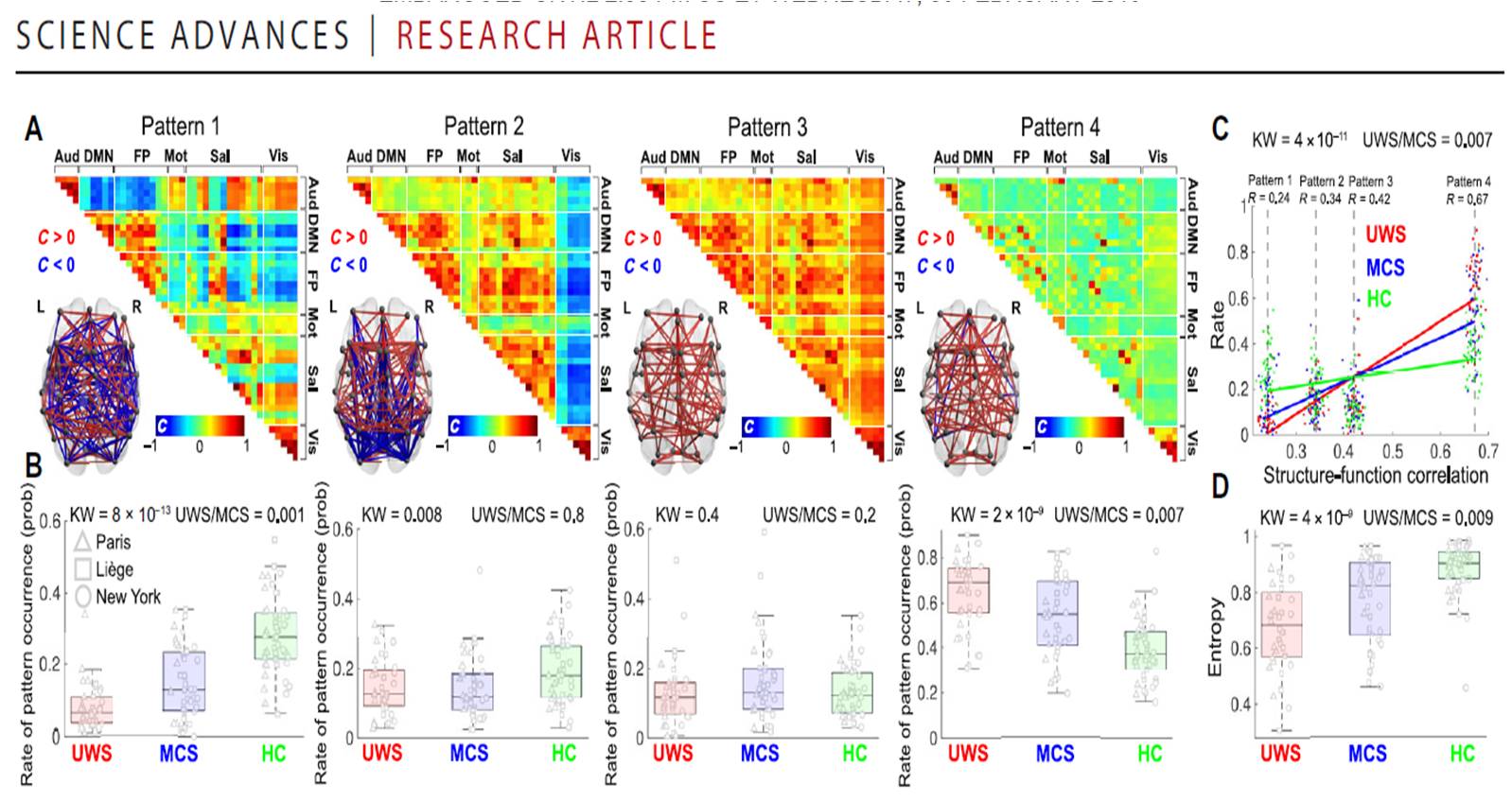 Consciousness, from the moment we go to sleep until we wake up, seems to come and go every day. Consciousness can be temporarily abolished by pharmacological agents or more permanently by brain injury. Each of these departures from conscious wakefulness brings about different changes in brain function, behaviour and in the brain’s neurochemistry. However, they all share a common feature: the lack of reported subjective experience.

Thus, consciousness is humans’ ability to perceive reality and report it, and it is revealed through the expression of the subjective experience. The question is: how can consciousness be inferred in the absence of communication? Several theories agree that consciousness relates to a self-sustained, coordinated dynamic process of brain activity, which helps humans tune into a constantly changing environment. Therefore, over time, brain signals combine, dissolve, reconfigure and recombine, allowing perception, emotion and cognition to occur.

“Adopting the theoretical viewpoint of brain dynamics as the cornerstone of consciousness, in this study we aimed to determine whether the coordination of brain signals could provide a specific pattern of functional connectivity characteristic of conscious and unconscious states”, states Gustavo Deco.

By means of functional magnetic resonance imaging (fMRI) techniques, an international team of researchers conducted an analysis of dynamic connectivity in healthy humans and in patients with severe brain lesions that led to disorders of consciousness. With this method, the scientists characterized in conscious subjects and in minimally conscious patients different brain dynamics from those recorded in patients in an unresponsive or a completely unconscious state.

Gustavo Deco, ICREA research professor and director of the Center for Brain and Cognition (CBC) at the Department of Information and Communication Technologies (DTIC) at UPF, joined an international team of researchers in the study, and is co-author of the article published on 6 February in the journal Science Advances.

The data were obtained from a cohort of patients with consciousness disorders leading to a vegetative state: Unresponsive Wakefulness Syndrome (UWS) or Minimally Conscious State (MCS)

The data required for this study were obtained from a cohort of 169 subjects from Belgium, France, the United States and Canada that included 47 healthy subjects who acted as the control group and 122 patients with disorders of consciousness that led to a vegetative state: Unresponsive Wakefulness Syndrome (UWS) or Minimally Conscious State (MCS). UWS patients open their eyes but never display non-reflex voluntary movements, which indicates preserved awareness. Patients in a MCS, although displaying more complex behaviours, are potentially declarative of awareness, such as visual pursuit, orientation to pain or non-systematic command following, lack the ability to express their thoughts and feelings. 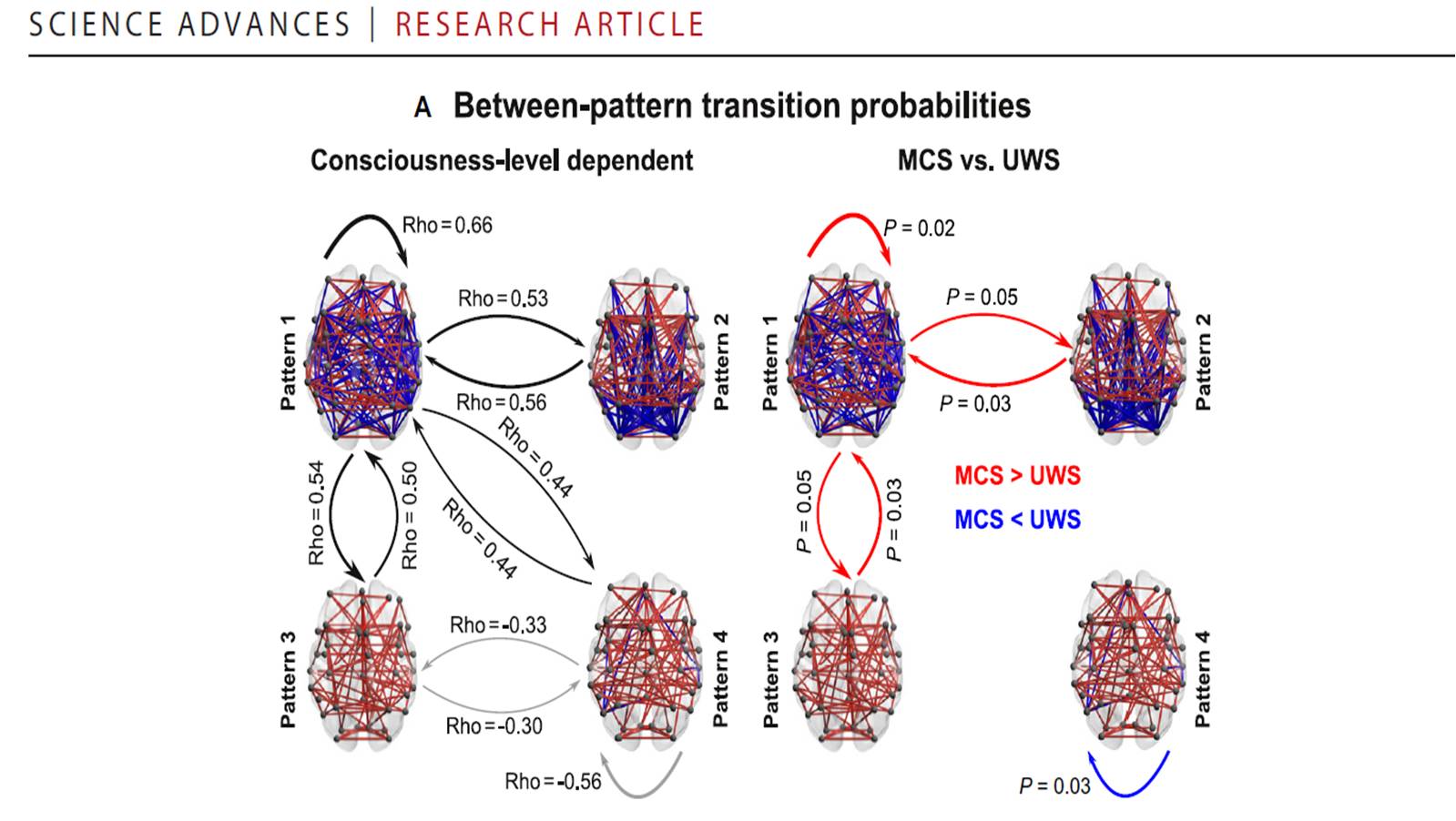 The study has found a pattern of complex interareal coordination, appearing sporadically, in the group of unresponsive patients

The results of the study indicate a pattern of low interareal phase coherence in the brains of unresponsive patients, primarily mediated by underlying anatomy and less likely to transit between patterns of brain activity. Among the unresponsive patients, in the study, those patients who could perform mental imagery tasks presented in the fMRI a transient complex pattern, validating the implication of this pattern of functional brain connectivity in a state of consciousness. Conversely, the low interareal coordination pattern was highly and equally prevalent to that of anesthetized patients, regardless of clinical diagnosis, validating its involvement in unconsciousness.

“Our results establish that human consciousness rests on the brain’s ability to sustain rich dynamics of neural activity that lose prevalence in unconscious states”, points out Gustavo Deco, co-author of the study.

The authors conclude that, following the loss of consciousness, coordinated brain activity is largely restricted to a positive pattern of interareal coherence dominated by the anatomical connections between brain regions. In contrast, conscious states are characterized by a higher prevalence of a complex configuration of interareal coordination that, although still constrained by the anatomy of the brain, also deviates from it and presents positive and negative long-distance interactions.

This study has found a pattern of complex interareal coordination, appearing sporadically, in the group of unresponsive patients. The real-time detection of this pattern and its reinforcement through externally-induced manipulations could represent a promising avenue for the non-invasive restoration of consciousness. We conclude that these patterns of transient brain signal coordination are characteristic of conscious and unconscious brain states, warranting future research into their relationship with the conscious content and the possibility of modifying their prevalence with the introduction of external perturbations, both in healthy individuals and in patients.